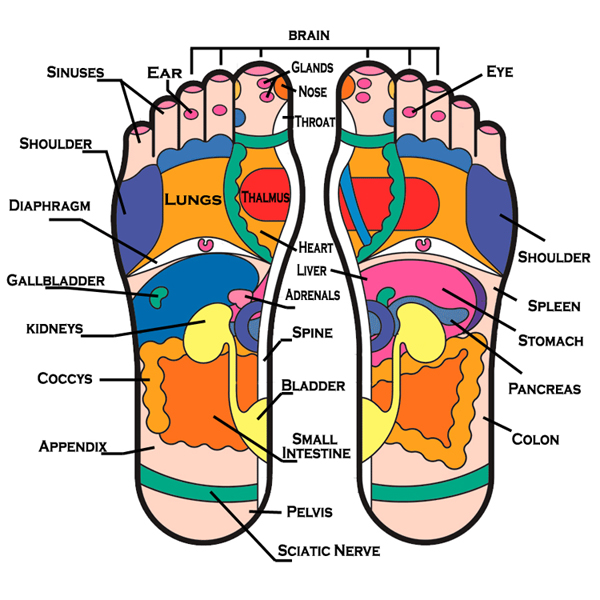 Reflexology is one of those treatments you’ve probably heard of but don’t know much about. It’s thought this ancient therapy was developed thousands of years ago and first passed down through an oral tradition. still practised around the world, this gentle healing method has helped many people who need relief for stress and tension.
Reflexology is based on the scientific principle that reflex areas in the feet, hands and ears relate to various organs and other parts of the body. In a reflexology session, the therapist applies pressure to these reflex areas in order to bring health and balance to the body through the stimulation of the body’s own in-built healing capacity. Reflexology is generally a very subtle, non-intrusive therapy. For this reason, it is one of the few natural therapies that have been adopted by the nursing profession. Increasingly it is being used in palliative, midwifery and aged-care programs and also to complement massage and other tactile therapies.

It is known to help quickly relieve stress and tension, bring harmony to the body and increase immunity. Studies show that long-term treatment can assist with a wide range of ailments from pre-menstrual syndrome to migraines, digestive issues and arthritis.

Heather Edwards, the president of Reflexology Australia, says, “The benefits of reflexology vary from person to person and are available to almost everyone. You do not have to believe in reflexology for it to work: it will have an effect anyway. Initially, it reduces stress, which makes it particularly beneficial to use with virtually any other therapy. It is commonly used to help with back, shoulder and hip pain, respiratory weaknesses, headaches, women’s issues, including all things maternity, and working with the elderly and infirm.”

It is said that up to 80% of illness is caused by stress and tension. This is a very high percentage but ultimately positive because it means that we have control over our health if we actively work to reduce the amount of stress and tension in our lives. Reflexology can assist greatly in reducing stress by calming the nervous system. The application of pressure slows down nerve velocity, which in turn calms the whole body. By stimulating the nerves in the feet, reflexology encourages the opening and clearing of neural pathways, and in turn, pain pathways are interrupted, reducing aches and pains. At the same time, reflexology stimulates the production of encephalins and endorphins –both great for inducing a sense of euphoria.

A recent study by the University of Portsmouth in the UK found that, in certain cases, reflexology may be as effective as painkillers. The study had 15 people submerge their hands in freezing water. In one session the participants were given reflexology beforehand and in another session they believed they were receiving pain relief from a machine that was not actually turned on. When the participants received reflexology treatments, their pain threshold and their pain tolerance were greater than when they were given the phony treatment, registering 40% less pain and 45% greater tolerance.

If you need to detoxify and reduce swelling you need to improve circulation, and reflexology on its own or combined with massage may help. Blood should flow freely through the body to carry oxygen and nutrients to all the cells and remove waste products and toxins. In the reduction of stress and tension, reflexology allows the cardiovascular vessels to conduct the flow of blood more easily.

If you’re looking for a gentle therapy to support your healing, consider reflexology. Find a registered practitioner for treatment that’s right for your situation.