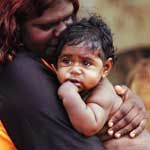 Australia’s Indigenous population suffers a higher infant mortality rate and a lower life expectancy than those in New Zealand, Canada and the US, a new report has shown.

While Indigenous populations of all four countries compare poorly with the broader population in matters of health, Australia has the worse trends according to the report from the Australian Institute of Health and Welfare (AIHW).

Australia rated the worst in terms of Indigenous infant mortality, with 11.5 deaths for every 1,000 live births (according to figures from 2002 to 2004).

Figures cited in the report also show Indigenous Australians die 17 years earlier than those in the broader community.

In New Zealand, the gap is about eight years; in Canada, it’s 10 years, and; in the US, it is under three years.