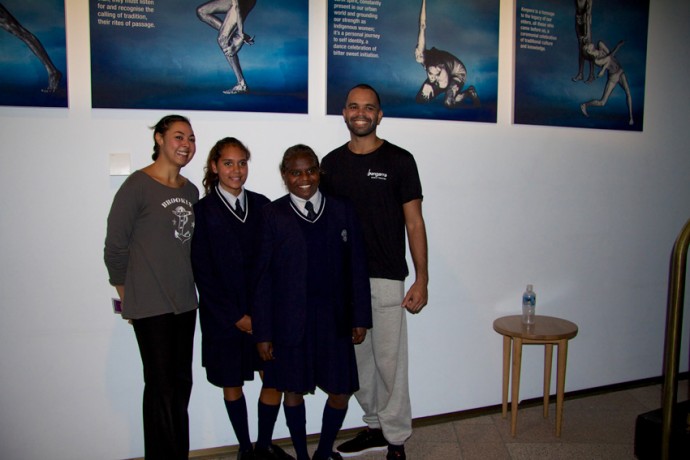 Bangarra Dance Theatre will take to the Sydney Opera House stage from Friday 6 June with the world premiere of its new work ‘Patyegarang’.

Choreographed by Artistic Director Stephen Page, ‘Patyegarang’ commemorates the story of a young Eora woman who shared her culture and language with one of the first settlers, Lieutenant William Dawes.

Bangarra Dance Theatre draws its inspiration from Aboriginal and Torres Strait Islander communities. ‘Patyegarang’ is a Sydney story, and marks Bangarra paying homage to the land and people that the company has called home since it began 25 years ago.

Based on historical events and documents, ‘Patyegarang’ tells the story of a young Aboriginal woman of intense and enduring courage, an inspiration today for the respect of Aboriginal knowledge and language.

As the colonial fleet arrived on Eora country in the late 18th Century, ‘Patyegarang’ befriended first settler Lieutenant William Dawes, gifting him her language in an extraordinary display of trust and friendship, which now inspires our imaginations about ‘first contact’.

During the Sydney season of ‘Patyegarang’, Bangarra will host a series of events specifically for Sydney’s Aboriginal and Torres Strait Islander communities to honour the Eora nation, celebrating this milestone together.

A community night performance of ‘Patyegarang’ will be held on Wednesday, Friday June 6  with discounted tickets made available for Aboriginal and Torres Strait Islander audiences, supported by BHP Billiton.

As with previous Bangarra community nights in Sydney, this will be a special experience for audiences as well as the artists of Bangarra themselves. The atmosphere is always electric and celebratory.

Bangarra will be also be hosting Koori Kids Day this year at the Sydney Opera House on Wednesday, 25 June from 12.30pm until 1.40pm.

With support from BHP Billiton, Bangarra is able to offer heavily discounted tickets to Aboriginal and Torres Strait Islander secondary school students from the city and outer metropolitan areas to attend this special event.

After the performance, students will have an opportunity to engage with Artistic Director Stephen Page and other ‘Patyegarang’ creative team members during a Q&A session.

The students will then have the chance to meet members of Bangarra in the foyer. A study guide will be available for download from the Bangarra website along with other education resources.

“I look forward to sharing with you Patyegarang’s remarkable story. Surviving and thriving, strength and resilience, this spirit we share and celebrate every day,” Bangarra’s Artistic Director Stephen Page says.