Due to popular demand and following a hugely successful opening last week with glowing reviews from critics and audiences alike, Bangarra Dance Theatre has announced that six new shows have been added to the Sydney season of Patyegarang, now closing on 12 July. 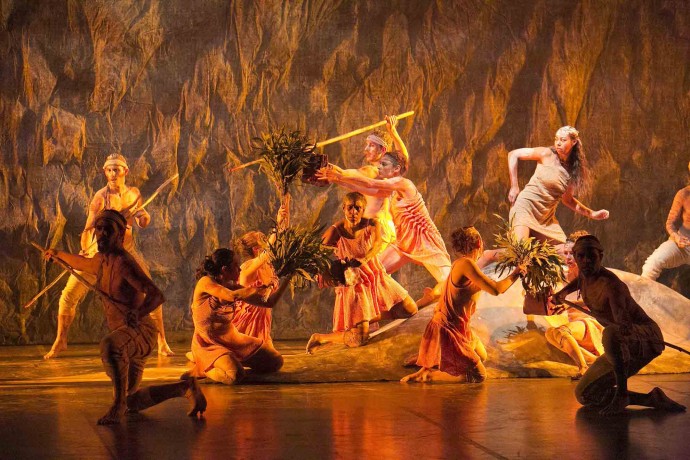 Due to popular demand Patyegarang will add new shows to its Sydney season Photo: Jess Bialek

“Patyegarang is one of the few good stories that happened during Australia’s first settlements, one that we should embrace and be proud of,” Bangarra’s Artistic Director Stephen Page says.

“As a company, we are pleased to see the reaction from the audience every night and look forward to sharing our storytelling through contemporary dance with many more audiences.”

Patyegarang is a remarkable story of first contact, as this young Eora woman befriended one of the first settlers Lieutenant William Dawes, gifting him her culture and language. This remarkable cultural exchange took place in a place called Tar-ra now Dawes Point.

Patyegarang offers a unique opportunity to re-live that encounter only a short walk away from the land on which it took place over 200 years ago.

Celebrating its 25th anniversary in 2014, Bangarra Dance Theatre is Australia’s premier national Indigenous performing arts company. Under the inspirational artistic direction of Stephen Page, Bangarra has strived to maintain the cultural integrity and spirit of Aboriginal and Torres Strait Islander tradition, combining it with contemporary expressions of stories, dance and music.

Bangarra creates dynamic, moving theatrical experiences and delivers these experiences to audiences across Australia and around the world.

Following the Sydney season, Patyegarang will be presented in Canberra, Perth, Brisbane and Melbourne.