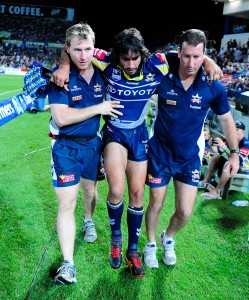 As we get into the swing of the football season, it’s a good time to make sure players, coaches and parents are thinking about safety and injury prevention as well as strategy. Here, sports chiropractor Matt Windsor shares some of his insights into how players can get through the season unharmed.

Former Rep player and now coach and sports chiropractor Matt Windsor says he sees several common injuries in his practice that could easily have been prevented.

“I see a lot of shoulder injuries, particularly with rugby players and that is at all levels, from juniors to international. Also a lot of neck, shoulder and lumbar spine, but shoulders are the most common.” Matt says.

While coaches learn safety skills that are passed on to players during coaching sessions, Matt says these skills are often an afterthought because the main focus is usually on strategy.

“(Players) should be taught how to fall, there is a big push at the moment in coaching in Union at the moment. Coaches have to go to the ARU to do a course and a lot of it is actually about safety: how to tackle, engage in scrums – all the high-risk areas,” he says.

“I’ve spoken to a lot of other coaches who have actually learnt this stuff, but eventually they tend to focus more on the strategy of the game rather than aspects of safety and skill.”

Bearing this in mind, it’s also the responsibility of the players and their parents to be aware of their own physical limitations and strengths so that injury can be avoided.

One good way to become aware of your limits is to have regular sessions with a chiropractor. They can detect weaknesses in your body that you may not even be aware of.

“Being a wellness practitioner we want to see people before they are injured because a lot of the time what chiropractors do is not just reacting to an injury, or treating an injury, it’s setting up the system so that it can potentially avoid that injury in the first place” Matt says.

Getting to know your body is a process, but one that’s worth undertaking for maximum performance.

“A lot of problems exist under the surface without any noticeable signs unless you know what to look for. And that’s what a chiropractor will look for. They will be able to identify the signs that are already there already or potentially leading to an issue well before they get to a point where they are easily injured or even not fit to play.”

Apart from discovering your body’s strengths and weaknesses, Matt says there are other things you can do as a player to make sure you maintain peak physical condition through out the season.

“Skill development, learning how to fall and tackle have a big impact on a player. The other main one is pre-season fitness and conditioning: if it’s not done, you’ll see a lot of injuries in the first couple of games in the season. That’s because they’re asking a lot of the body in the way of performance, but they haven’t prepared it.”