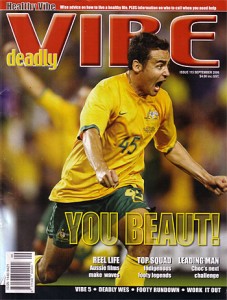 When Travis Dodd ran out wearing the green and gold jersey in front of 37,000 screaming fans at Aussie stadium last month for the Asian Cup Qualifier against Kuwait, he knew very well that he was playing the biggest game of his life.

In the lead-up to the match, Travis had another big game on his mind – his first league match for Panionios in the Greek first division. For his Australian debut, he was feeling the same butterflies he felt that day, only a hundred times more.

During the World Cup in Germany, Travis had cheered on the Socceroos from his living room like the rest of the nation. How could he even have dared to dream that, only two months later, he would himself be donning that iconic jersey? And yet, not only did this dream become a reality; he would also go on to score the winning goal on debut, to earn Australia qualification to the Asian cup.

It was a new look Australian side, with none of the European-based stars who had featured during the World Cup. Instead it was now up to the domestic A League stars – the next generation to carry the torch, and Travis seized this opportunity with both hands.

Playing on the right flank, Travis was heavily involved throughout the match, creating several chances. Always dangerous, he was Australia’s most threatening attacking player, continually beating his opposition with his first touch, and sending some dangerous headed crosses into the box. While the Australian side struggle d t o find cohesion in the first 30 minutes, a neat flick from Travis put Jason Carney into space for one of the first real chances of the match. But his strike blazed wide of the goal.

Travis continued to show flashes of menace into the second half. However, the match remained deadlocked. Just as the Socceroos were staring down the barrel of an embarrassing draw, Travis’ right boot ensured that Australia would become the first team to qualify for the Asian Cup Finals.

In the 76th minute, Alvin Ceccoli placed a perfect though ball for Jason Carney on the left hand side of the goal square. Jason gathered and moved to the by line before cutting the ball back infield. Travis came racing onto the ball, striking it sweetly with his right instep. The ball crashed into the back of the net, sending the crowd into raptures.

Just over 10 minutes later, Travis gathered the ball in the midfield and made a darting run down the right hand side towards the goal. Beating one defender, he shot at an angle. The Kuwaiti keeper parried the ball into the path of Sasha Petrovski, who tapped home Australia’s second goal.

“You rely on that type of person,” said Australian coach Graham Arnold after the game. “Travis is the type of player that can really step up.

“This is his debut. He’s shown that he’s got a lot of promise, but in the past he’s been maybe a little inconsistent. Now he’s mature – he’s 26. And when you’ve got pace like that and you can play like that, you can easily adapt to the international stage.”

With his emotions riding high after the match, Travis spoke about the immense pride of standing for the national anthem before the game; something that brought tears to his eyes. For Travis, the night was the culmination and realisation of everything he had worked for.

After representing Australia in the under 17s and under 20s, Travis moved to Europe to play in the Greek first division before returning home to play with Adelaide United in the Australian A League. In all this time never gave up hope of earning a call-up to the national squad. When Mark Milligan was picked from the A League to join Guus Hiddinks’ World Cup squad in June, it was further motivation that a green and gold jersey was well within his grasp.

Win, lose or draw, the match was always going to be a special moment for Travis. But to play the way he did – scoring the opening goal, orchestrating the second and winning Man of the Match honours capped an absolutely incredible debut.

While Travis was well and truly the star of the match, there was another Indigenous player who notched up his 13th cap for Australia on the night. Jade North made a triumphant return to the national side. Playing on the left side of defence, he was another of Australia’s star players, battling though a badly jarred knee to finish the match strong.

Both Travis and Jade are now set to play key roles in Australian campaign in Asia in 2007. With two more qualification matches to be played before the end of the year, Deadly Vibe congratulates both of them for their inspiring achievements and looks forward to watching this exciting Indigenous duo starring on the world stage.

Ex NRL star Ashley Gordon is using his knowledge, skills and profile to help conquer problem gambling among the mob.

Listen an interview from last year with the lovely Shellie Morris.

New APP has created digital access to a vast collection of content from the multi award-winning Canning Stock Route Project.