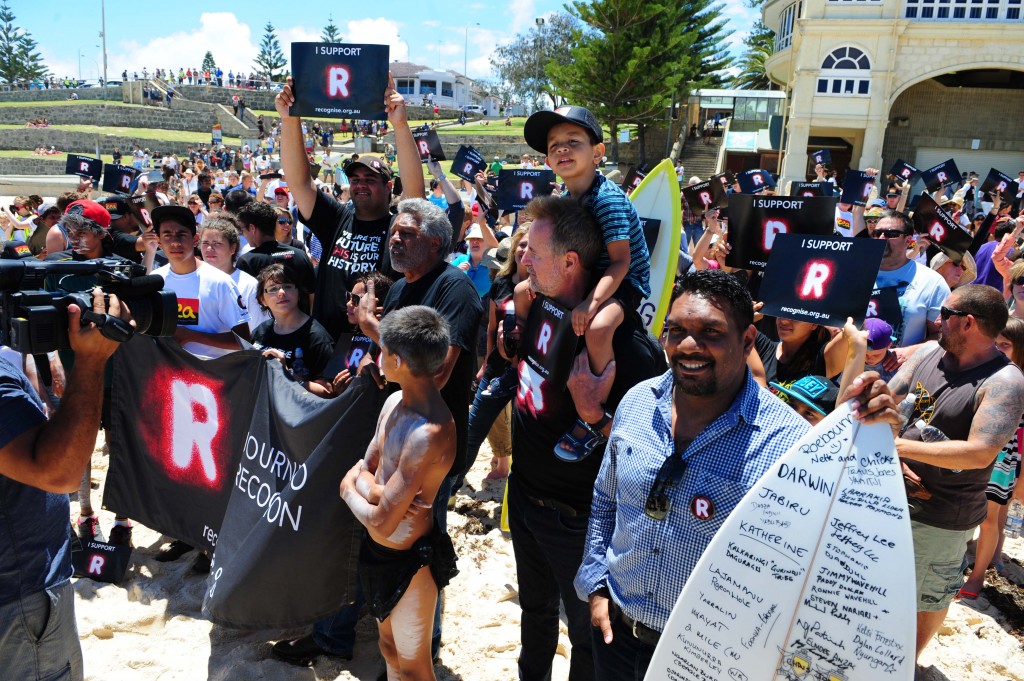 The organisation ‘Recognise’ wants to see fairness and respect at the heart of our Constitution, and to “remove racial discrimination from our highest law.”

The New Year symbolises a clean slate where you can take the 52 weeks to come and make them whatever you want to make them. 2014 could prove to be a year of achievement for Indigenous Australians with Prime Minister Tony Abbott stating that he will use 2014 to “start a conversation” about recognising Indigenous Australians in the Constitution.

The former Labor Government decided not to proceed with pursuing a Constitutional Referendum because they thought community support was not strong enough, but in his New Year’s Day message, Mr Abbott said that he will make garnering support a key priority this year.

“I will also start the conversation about a Constitutional Referendum to recognise the first Australians,” he said. “This would complete our Constitution rather than change it.”

Tanya Hosch, Deputy Campaign Director of Recognise (the people’s movement to recognise Aboriginal and Torres Strait Islander peoples in our Constitution), says the organisation will continue to take the message of the movement across the nation.

“The Journey to Recognition is an epic relay across the nation to build even wider community support for this movement. It is a chance for all Australians to engage in this process and talk about the proposed changes and what this would mean for our country’s future,” she says.

“We hope that this will be a unifying moment for Australia – but we need the will of the people to bring about this recognition and to ensure a successful vote at a Referendum.”

Although altering the Australian Constitution is no easy feat, Tanya says ringing 2015 in with Constitutional Recognition would be an amazing accomplishment for all Australians alike.

“I can’t think of a better gift for my parents before they die or for my daughter as she grows up than to see that formal recognition. There are lots of priorities across our communities and much important work being done to make a difference,” she says.

“The Prime Minister’s leadership on this is going to be crucial to us having a successful outcome on a referendum – but so is the leadership of everyday Australians working together for this goal.”

Because altering the country’s most important document is such a difficult and monotonous task, Tanya says that realistically she would like to see a draft wording for the model by the end of the year.

“Of 44 proposed changes to the Constitution since it was drafted, only eight have been successful. The biggest ‘Yes’ vote was in 1967, when 90.3% of Australians voted to ensure Aboriginal Australians were counted in the Census,” Tanya says.

“That voting record is a powerful reminder to every one of us that we all need to work hard to build community support even further so we can be confident of success.

“This is about fixing a historical exclusion and acknowledging the truth about our long history, and that Aboriginal and Torres Strait Islander people have always been here and we’re part of what makes Australia truly unique. And it’s about taking the opportunity to remove racial discrimination from our highest law.”

As Recognise’s ‘Journey to Recognition’ relay travelled around the country it was evident just how much Constitutional Recognition would mean to all Aboriginal Australians.

“Recognition is about acknowledging a simple but important truth: that we were always here and we are still here. It’s the right thing to do. On the Journey to Recognition relay, we’ve heard from many, many Aboriginal and Torres Strait Islander people about what this will mean to them,” she says.

“As just one example, Gumatj Elder Djunga Djunga Yunupingu, told us it was the right time and the right thing to do, and urged, ‘Don’t wait for five or 10 years, otherwise some of us will be old or gone.’

“We heard young people speak movingly about the tears that would be in their grandparents’ eyes to think that such recognition would be possible, given the treatment their generations endured. And we heard from scores of parents, who wanted their children not to have to go through the same battles they had – and who believed recognition would help to extend pride and respect for the country’s first peoples and cultures.”