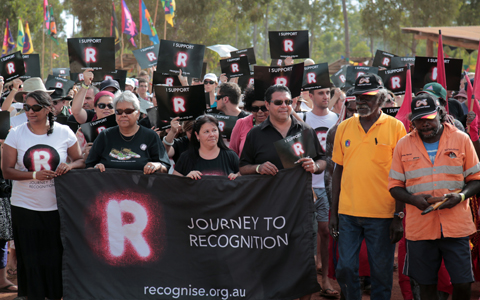 A young Nyungar man and third year law student embarked on a journey for recognition with the national initiative Recognise.

Recognise is a not-for-profit organisation aiming to get Aboriginal and Torres Strait Islander people the recognition they deserve in the Australian Constitution.

“I’ve always been passionate about being involved in this campaign. When the constitution was first drafted, Aboriginal people weren’t seen as citizens, and weren’t counted as such until the 1967 referendum,” Dylan Collard says.

With the companionship of his girlfriend Kelsi Forrest and first cousin Deearne Lee, Dylan has been gallivanting across the country recruiting locals and meeting some lost family along the way.

“Driving through country from Kalgoorlie all the way to Perth means a lot, as I’ve got family all along the way. I’ve had the opportunity to meet up with them and tell them what I’m doing, and their support has been really inspiring for me- knowing that I’m doing something that my ancestors would be proud of means a lot,” he says.

“For my grandparents, constitutional recognition is about acknowledging them and their parents and grandparents and a thousand generations before them. For the children we met at my old primary school, it’s about making a better future for everyone. The change we’re making will directly affect these children.”

Dylan’s grandparents worked hard towards reconciliation and while they have now passed away, he feels that this is something that they would be proud of him for.

“White settlement directly affected my grandparents in this region – issues like disadvantage and the Stolen Generations had an impact on their lives. It’s also what drove them to work in the area of reconciliation,” he says.

“I think it’s important to acknowledge that although Aboriginal and Torres Strait islander people only make up only 2.5% of the population, they make up over 99.5% of the history of this country.”

Dylan’s father Brett Collard is proud of the work his son is doing and says that he will die a happy man if the Aboriginal people are recognised as the first peoples in the Australian Constitution.

“For me this campaign is the last chapter in Aboriginal rights – to be recognised as a complete person,” he says.

“For my parents, their parents and my ancestors, they would see constitutional recognition as something that achieves what they were fighting for a long time ago. Just to be recognised means a hell of a lot to anybody.

“To be recognised as the Traditional Owners of this country would complete a lot of people in many ways. People like my Uncles and Aunties – it would mean a hell of a lot more to them because they lived through traumatic stages in their young life where they weren’t allowed to go to school and weren’t accepted into the wider community.”