“A vivid, poignant, political and often unexpectedly funny work … that demands our full attention deserves it and rewards it,” is what the Sun-Herald had to say about Beautiful One Day – a theatrical documentary about the life and times of Palm Island.

Set in 2004, it centres on the in-police-custody death of Aboriginal man Mulrunji Doomadgee and the events that ensue when the small community makes a direct challenge to police power and demands justice, which has continued for eight years until the present day.

The theatrical documentary has its origins in the mutual outrage that the Ilbijerri Theatre Company, Belvoir St Theatre, the Version 1.0 theatre company and the Palm Island community feel for the injustices that the community has suffered. 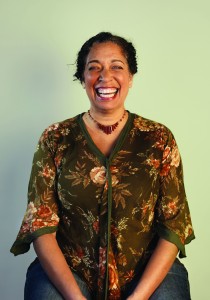 The cast of the production represents the real voices of the community, including Ilbijerri Theatre Company Artistic Director and star of The Sapphires on stage Rachael Maza Long, who has family connections to the Island.

“It was almost like that feeling when you tread in the same steps as someone,” says Rachael about her experiences in the production.

“The stories obviously parallel my own family’s stories – that was a really powerful journey for me, definitely.”

As well as accurately documenting the experiences of those living on Palm Island, Beautiful One Day acts as a remedy for the overwhelmingly negative coverage that the Island constantly receives.

Rachael recalls a trip she took to Palm where her preconceived expectations of the intimately beautiful Island were soon to be positively and utterly disproven.

“Besides all the hype you see in the media I didn’t know what to expect. I’d never been to Palm. So I go there and I was shocked at how beautiful it is,” she says.

“We got off at the pier and people were standing there smiling and were friendly. We go further up and there’s a little coffee shop there and we have a really nice coffee and the guy’s friendly and it was just one thing after the other. This isn’t anything like what you read about in the papers!

“An epiphany happened, it was like ‘Oh my god, this is how it works’. When the media is only interested in the sensational stories, then all we’re hearing on the mainland is the negative stereotyping. It’s too easy for them to pull out the usual old stock footage, references and ridiculous stereotyping jargon.

“Anyway, we very quickly realised that Palm Island is a very beautiful place and it’s had a very fraught, dark and oppressive history, but that mob are resilient. They are powerful, they are proud and they have powered through despite everything that has happened to them. They are a vibrant, strong and positive people.

“That was one of the things that we really wanted to strongly capture in the production.”

The verbatim style play is now gearing up for its Victorian premiere and while Rachael agrees that it can be tricky to interpret such a dramatic and intense story to the stage, all the hard work pays off and getting their story out there is of paramount importance.

“We’re all about telling stories that fundamentally are truth, so it’s about bringing truth to the stage. We weren’t interested in fictionalising or dramatising anything. The words that we speak on stage are directly drawn from actual documented court transcripts, media, or interviews.

“It’s about getting our stories out there and taking them back into our control from our perspective, our image and putting that in the mainstream knowledge pool.

“At the moment we have had 200 years of other people telling our stories and 200 years of people boxing us and stereotyping us. It’s all about rewriting, reclaiming and correcting our history.

“We find ways of doing it that are entertaining and hopefully not didactic or biased. For me it’s all about having the conversations, let’s be bold, let’s be brave and let’s have fun doing it.”

For more information on the production visit Arts House.