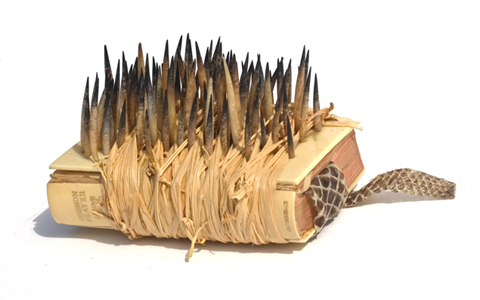 In a grassy field, behind a bold ‘No Trespassing’ sign in Sydney’s west lies a source of memories for region’s ancestors. The Blacktown Native Institute building was established in the 1820’s and played a significant role in ‘Europeanising’ Aboriginal people of the Stolen Generations era.

Of the six artists – Daniel Boyd, Robyn Caughlan, Karla Dickens, r e a, Leanne Tobin and Jason Wing, two of them are descendants of Aboriginal people who attended the Institute.

Local artist and Darug woman Leanne Tobin has a strong connection to the site as her great-great-great grandmother Maria Lock was among the first of those enrolled in the Institute.

“I’ve been an artist participating, but I’ve also had a personal interest because my ancestors are directly related to that space,” Leanne says.

It was Maria Lock’s intelligence and remarkable adaptation to the education system that helped her become the first Aboriginal woman to receive land as part of a marriage portion from the Australian Government.

“The way that Blacktown got its name was through my relatives and others establishing living areas there on land the Government had given them, so it became known as the ‘black’s town’,” Leanne explains.
The exhibition is important in highlighting the history of the first interactions between the Europeans and Aboriginal people of Australia.

“It’s one of those things where people don’t really know the story here in Sydney. As a direct descendant of those people I feel that it’s absolutely vital that they get to know what went down here,” Leanne says.

In the exhibition Leanne takes a very literal approach to her artistic interpretations to ensure the wider community can understand the story. Some of the other artists, such as Karla Dickens, have taken a more abstract approach.

Karla’s focus has been on the everyday rituals of the institution and the ways that religion and education were forced upon the Aboriginal people to be the “civilised” way of living. Her art reflects this as she uses prayer books and lace combined with sharp objects to express her interpretation.

The Native Institute Exhibition has free admission and is open Tuesday to Saturday, 10am to 5pm. More information can be found at www.artscentre.blacktown.nsw.gov.au.