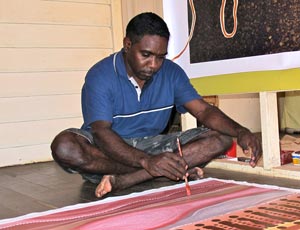 Edwin Mulligan, Kimberley born and bred Aboriginal artist captures you with his riveting stories and takes you into another world, his world. Sitting on the old jarrah floor of a 19th century pearling house Edwin rents in Old Broome, he relays a story of his life and his inspiration to paint. “I knew at a young age, I had something in me which I could improve on,” Edwin reflects. What he had in him was a passion for his culture and a desire to share this with his people and the rest of the world. He was born in Derby in 1980 to mum Merrilyn Mulligan and father Hanson Boxer. His Aboriginal name is Warrda Lumbadij Bundajarrdi. Edwin grew up in Yakanarra a small community southeast of Fitzroy Crossing and lived most of his early life there. He also spent a lot of time in Noonkanbah community where he returns for ceremony and to visit family. He is a Walmajarri descendant from his father’s side, which covers the Great Sandy Desert in the Central Kimberley. Nykina is his mother’s side, which stretches along the mighty Fitzroy River from Derby to Fitzroy Crossing. Edwin is not a stranger to the arts. His father, Hanson Boxer is an accomplished wood carver and Jimmy Pike, his grandfather is one of the most brilliant Walmajarri artists. At an early age, Edwin started his career in painting. At eleven, Jimmy said to him, “you gonna be a famous artist like me.” But it took a life of learning, inspiring mentors and a tapestry of stories to unfold before Edwin became the artist he is today. Despite these impressive figures in his life, Edwin has carved his own career-path in the arts. Taking inspiration from Kimberley artists, Clifton Bieunburry and Neil Carter, Edwin uses their influences to, in his own words, ‘make something from nothing – and make something attractive.’ However, it hasn’t always been about painting for Edwin. Football came naturally to him and he was selected to play for the Aboriginal All-Stars in Perth. After a week in Perth with the All-Stars in 2008, Edwin decided not to follow a career in AFL and returned to the Kimberley. It was this same year Edwin won the Shinju Aboriginal Art Award in Broome. Painting was always something he returned to. “People loved my style of art, so I started thinking, I could go somewhere with this,” and he is, Paris, Berlin and Amsterdam. Edwin is one of 14 Indigenous artists from Western Australia who have been selected as part of the Nomad Two Worlds. Created by world-renowned photographer, Russell James, it is a collaborative art project with Indigenous artists showing the clash between the ancient and modern worlds combining photographs and traditional Indigenous painting. Whilst Edwin is nervous about how the European audience will respond to this new style of art, he is looking forward to telling his story in Europe in August 2011. “I like to tell a story and give them (the audience) a sense of belonging about culture. I can tell them stuff and they can take it into their society.” Edwin is a refreshing young man. He has the ability to live in both the international art world and Noonkanbah in the remote Western Australian desert. He can support himself and choose to return home as and when he pleases. For now, Edwin believes, “I need to learn a few more things and then I’ll go back.” If Edwin can pass his culture onto others, he is content. “I don’t know if I am teaching people, but I am telling a story, my story,” he explains.