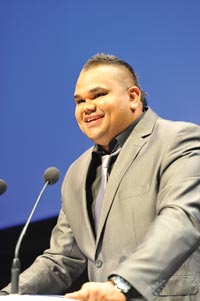 His office is up a pole with sweeping views of trees and sometimes over the ocean. He has the power to get your electricity back on and he wears hi vis and a hard hat. The man with all this power at his fingertips is NAIDOC apprentice of the year Joshua Toomey and while his career is now reaching dizzy heights, it hasn’t always been that easy.

The NAIDOC award is not the first recognition this Ausgrid linesman has had. In June this year he was also awarded the NSW Regional Training Award for the Indigenous Apprentice of the Year. He’s a mentor to other Indigenous pre-apprentices, who’s regularly called upon to speak in public about his experiences, and is a growing role model for young Aboriginal people and Torres Strait Islanders who are doing the hard yards.

The reason this knockabout tradesman from the Central Coast of NSW is in demand is quite simple: he’s got a good story to tell – from high-school dropout to qualified tradesman and all without much in the way of numeracy and literacy skills behind him.

“I kept coming back. I had a choice and I was going to finish my apprenticeship,” he says. “Before the ‘c’ word used to scare me because I had never committed to finishing anything, but I worked hard and kept it simple. I found extra help and just kept coming back. My TAFE teachers walked with me and I put the concentration into action. I just learned it – there were no magic pills and after awhile I put two and two together.”

One of Joshua’s main drivers was fatherhood. At the time, when the study was tough, his partner was about to have their baby.

“I decided I was going to be responsible and be a good role model for my child. It wasn’t always easy, getting up at 5am for four years and dealing with different people, but the other side of the coin was that feeling I had of self worth. I was free. No Centrelink ties. And I was independent with a weekly income,” Joshua recalls.

“It is a nice feeling to have a home and my son sees me going to work every day. I’m breaking the cycle and showing him that to get money you’ve got to go to work. That’s the stuff I didn’t have, and I try and always choose to be talking and walking it.”

But despite the awards and recognition, he hasn’t forgotten who he is and where he came from: “I’m a blackfella and I’m now able to pass on what was freely given to me”.

Much of this sentiment comes from the help his mentors gave to him.

“I always thought people were better than me. Today I’m comfortable with myself. What kept me going when times were tough was something as simple as a handshake from people. And the TAFE teachers – I got so much kindness, respect and love from them that they moulded me back to life. I can pass all of that on now.”

“He delivers a two-hour introduction to the pre-apprenticeship program. I talk a bit about wellbeing and what it’s like to be walking in two worlds, the importance of goalsetting, listening and communication and the support groups that are there. And I also give out Minties and Fantails, which are half gone by the time I get to give them out…”

Joshua looks back on his school days, acknowledging that at the time, he didn’t think he needed school: “But school’s like the foundation of a house. It’s gotta be solid and you get your start at school”.

Today, he’s a happy man. “I love my job and the weapon of education. It’s knowing, not guessing all the time, and asking questions for myself instead of relying on what someone else tells me.”

And, yes, he’s still setting goals: “I’m putting one foot in front of the other and keeping it simple”.