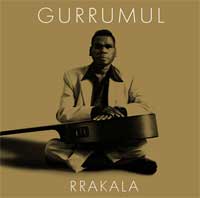 Presented at the Garden’s Amphitheatre in Darwin before a live audience of thousands, it was the first time the awards were open to all Indigenous Australians rather than solely NT artists.

Beneath a star-filled sky, Gurrumul’s latest album Rrakala was awarded Album of the Year and Artwork of the Year. Gurrumul was also named Act of the Year.

Gurrumul and Blue King Brown’s single ‘Gathu Mawula Revisited’ took out the awards for Song of the Year and Film Clip of the Year.

Unfortunately Gurrumul was unable to attend the award ceremony; however he made a brief appearance via webcam from his home in the Arnhem Lands.

Maymuru, a former member of Yothu Yindi, sings in his native Yolngu, the language of his home community in Yirrkala in NE Arnhem Land. His music “celebrates Rrawun’s relationship to Dhuwa and Yirritja country where he grew up.”

The other big award presented at the NIMAs was the induction of Coloured Stone and No Fixed Address into the NIMA Hall of Fame.

Speaking at the NIMAs, Gavin Jones, Executive Producer of the 17th Annual Deadly Awards, said “these legendary Indigenous bands have blazed a trail for contemporary indigenous music into mainstream Australia.

“These icons of the 80s have been role models for our people at a time when it was tough for a blackfella to get a break, let alone be paid for a gig.

“No Fixed Address was the first Aboriginal band to travel overseas, touring the UK.

“And the Warumpi Band literally made history when it released the first rock/pop song in Aboriginal language in 1983 – (jai-lang-a-ru park-a-nu).”

For more info on the NIMAs head to http://nima.musicnt.com.au/