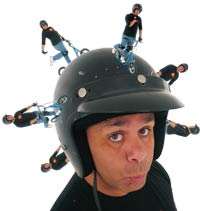 The ability to have a good laugh at ourselves and the situations we can find ourselves in has long been acknowledged as a great coping mechanism for stress and even a way of assisting people with depression.

Aboriginal comedian Kevin Kropinyeri has been a performer at the Deadly Awards as well as a standup comedian for many years. He is a firm believer that humour can assist people with depression, or even that it can just help those who are feeling down feel better.

Over the last three years, he says that he’s had three or four people come up to him after gigs to tell him how he has helped them.

“One of the most memorable was a show for the Victorian Koori Justice. I had a person come up at the end of the night and he said he’s been through a hard time recently in losing his sister and his mother and that he was really down and hadn’t laughed in a long time. ‘You broke that for me’, he told me.

“Another bloke once told me – ‘What you have done for me is awesome. I laughed so hard my cheeks are still hurting’, and I said, ‘I hope you mean your facial cheeks.'”

While there is a combination of ways to help people with depression, Kevin says studies have shown that sometimes laughter is the best medicine.

“There are even clowns in hospitals nowadays,” says Kevin.

Kevin also believes that the mainstream often doesn’t realise that Aboriginal people can laugh at themselves.

“We know how funny our mob is, but it is making that transition with Aboriginal humour to the stage that is sometimes hard,” he says.

“At the Melbourne Comedy Festival recently, I told a few jokes that had Aboriginal people laughing out loud, while the non-Indigenous people in the audience were squirming a bit in their seats and not quite sure whether to laugh. They thought it might have been a bit below the belt. We have always had a way of laughing at ourselves.

“Early on in my comedy career there were a few ways I could have gone and one of them was, ‘let’s beat up a whitey humour’, but I decided that there wouldn’t be much tenure in that, so what I do is invite everyone into the funny world of being an Aboriginal person.”

“I pick my crowd – I will do a different show for Aboriginal people than what I would do for non-Indigenous Australians. I’ve got to spin it out a bit more for them.”

Comedy writer Angelina Hurley agrees about the importance of being able to laugh at yourself.

“Just when I feel like I have totally lost it, wanna poke myself in the eye and commit myself, I am brought back to the brink of sanity. Someone will call me with a hilarious, absurd and classic story that makes my face and belly ache. I love my mob to death.”