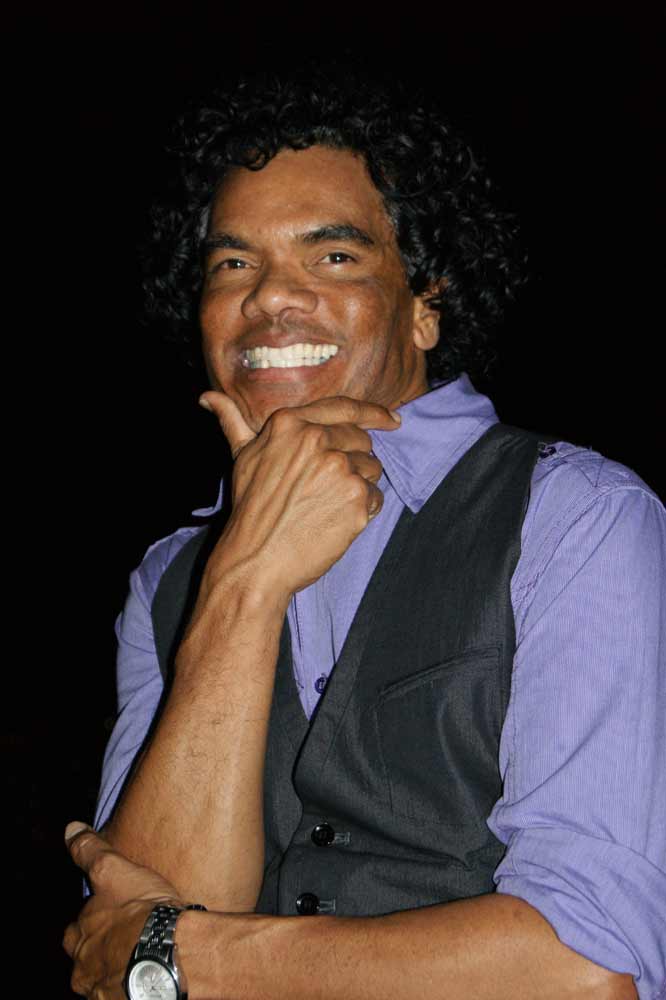 Comedian Sean Choolburra’s latest show, 50 shades of blackness, focuses on good relationships as one of the main ways to stay healthy and happy. But it’s not all serious. As you would expect, his self-written, one-man comedy fest has got plenty of jokes to keep audiences entertained.

“When you think about being Aboriginal, our relationships are important. We’ve got programs to tackle smoking and chronic disease but if you’re in a healthy relationship, you’re going to look after yourself. As they say happy wife, happy life,” he says.

Such relationships that can help a person accept themselves and find contentment.

“When you get married and have kids, you start to take life seriously. If you have supportive family at home and you’re tight with your partner, that leads to good things: exercise; eating healthy; and you don’t stress out as much,” he says.“There’s a healthy relationship out there for everyone.”

Sean has been married for about a year and has a three-month-old baby. It’s the second marriage for he and his wife who both have children from previous marriages. “We’re loving it,” he says. “And we definitely have that Brady Bunch thing happening. “You can search to find yourself in life and then you meet someone and you are happy within yourself and you think, ‘hey this is me’, and it all progresses from there.”

Sean has lent his humour to a number of Government campaigns over the years because he believes humour helps deliver the messages. The ‘No Smokes’ campaign is an example where Sean adapted Beyonce’s song, ‘All the Single Ladies’, to talk about the harmful effects of smoking while advocating nicotine replacement therapy as a tool to quit smoking.

“Humour breaks the ice, particularly on sensitive issues. When you can make light of something, people get into it more and are likely to listen. Sometimes you have to address really serious things but if you watch comedy, it’s a method of teaching and educating. Young kids particularly love comedy,” he says.

Sean is performing 50 Shades of Blackness at the Melbourne International Comedy Festival and tours around the country performing for communities. On the road, he sees the effects of alcoholism, drug dependency and cigarettes on his people and the wider community.

“It was different when I was a kid. When you were bored you went for a swim in the creek, today when kids get bored there’s self-destructive behaviour,” he says.

While it can be hard using humour to get the message out, particularly over sensitive issues, humour can pack a hard punch. When the former Prime Minister, John Howard, was refusing to say sorry to the Stolen Generations, Sean’s standard joke was:  “John Howard wouldn’t apologise [to the Stolen Generations] because he’s more concerned about the swollen generations and tuckshop reform.”

Sean hasn’t always been a professional comedian, though his pursuit of humour dates to a childhood love of comedy movies, and an interest in the ways words can be used.

“Take the word gammin and television and movie ratings. The rating of ‘G’ stands for Gammin and ‘PG’ Proper Gammin and so on. When people come to see my shows and I do that joke, they get home and see a rating on television and think back to my comedy show and its content.”

He gets his inspiration for his jokes from ‘tying up’ the past with the present and getting the key messages in. Everyone in Australia was worried about the Japanese killing whales, but when they landed on our beaches we were pushing them back into the water. We might need a whale detention centre in Woomera,” he jokes.

“Often you have to get into the politics and your own background and culture. You want people to laugh with you, not at you,” says Sean.

He has “always had humour in his head”. Growing up in Townsville (he identifies with the Girramayi people of Cardwell, North Queensland), Sean listened to the jokes on TV and began mimicking TV characters. When he was 21, he moved to Sydney and down the road from the place he was staying was the Comedy Store, one of Australia’s best-known clubs for stand-up comedians.

“Everyone loves comedy. You know you hear stuff and I was always thinking about how they wrote that. I would watch a comedy movie on TV and just replay a funny scene over and over again. I started to think about how we should do comedy in Australia. We have the docos and the atrocities in our history but we also like mucking around and laughing.”

Sean put his name down at the Comedy Store. He wasn’t too nervous because he was used to the stage as an ex Bangarra Theatre Company and NAISDA dancer, but as far as comedy went, Sean had no experience.

“Here I was, a blackfella who’d watched a few comedians and now I was putting my name down at the Comedy Store and they were saying, you go on in five minutes…”

It wasn’t such a bad debut though. Sean went on to win the triple j comedy comp at 33 years of age and has been performing ever since.

For those who want to catch 50 Shades of Blackness, head to www.ticketmaster.com.au