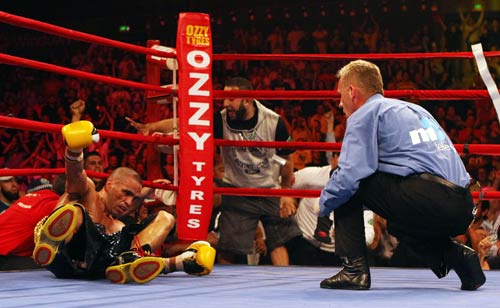 Wood, who secured the fight with Mundine after winning 2009’s reality boxing program The Contender, entered the fight as a huge underdog, and now owns the rights to one of the biggest upset victories in Australian boxing history.

The fight was scrappy from the outset with constant grappling, and very few clean punches landed. Mundine began the bout trying to keep a comfortable distance from Wood, who’s tactics were clearly to pressure Mundine as much as possible. A frustrated Mundiune complained to the referee about the wrestling and blows to the back of the head throughout the fight.

58 seconds in the fifth round, Mundine was felled by a left rip to his left temple as he crouched against the ropes and was unable to recover before the 10 second count.

An ecstatic Wood later paid tribute to Mundine for honoring his promise to proceed with the bout – despite having absolutely nothing to gain from it.

Mundine meanwhile was left pondering his next move after only his second knockout defeat in 44 fights.

”I got caught but it is about how you bounce back. He is tough and all credit to him,” he said. ”We’ve got to go back to the drawing board and go from there. Congratulations to Garth, good luck to him.”