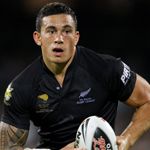 Williams is believed to be considering stepping into the ring to support Mundine’s KO To Drugs promotion and has reportedly been training at a Toulon boxing gym.

While an official announcement is yet to be made, Mundine is understood to be preparing to fight fellow Indigenous world champion Daniel Geale in May.

Geal is the current IBO middleweight champion while Mundine has previously held world titles in the super-middleweight division.

The presence of Williams on the undercard would give the bout massive exposure considering the former Bulldog’s controversial walk out on the NRL midway through the 2008 season.

After returning from a three month spell on the sideline due to injury, Williams has been staring for Toulon and will return to Australia for the first time since his much publicised departure when Toulon play the Barbarians at the SFS on June 6.