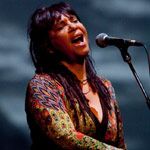 Performing for Canada’s Aboriginal people at this year’s Winter Olympics, was an amazing experience for the Black Arm Band. Shellie Morris tells us all about it.

Recently, Shellie performed with Aboriginal super-group, Black Arm Band, a collaboration of Australia’s top Indigenous artists, at the opening of the Winter Olympics in Vancouver, Canada.

“The most wonderful thing about going was that we were part of the cultural Olympic program and so our concert was specifically for the Canadian Aboriginal people. It was for the four host nations to come and have a free concert with Aboriginal people from Australia. We also performed at the opening ceremony the next night and that was fantastic as well,” says Shellie.

Apart from playing some great music with her fellow musicians in the Black Arm Band, Shellie says that the highlight for her was getting to see the strength of the Canadian Indigenous people first-hand.

“We got to spend all of our time surrounded by Indigenous people from Canada and for me that was the highlight of being halfway around the world – celebrating our cultures together.”

As part of the Stolen Generations, Shellie says she found a lot in common with the Aboriginal people she met in Canada.

“There are so many similarities with the Stolen Generations,” says Shellie. “They were put into residential schools, which is very similar to the Darwin story, and also their struggle for self-determination. Canada is a lot older as a country and as a result they seem to be making a lot of headway. The four host nations of the area the Olympics is being held in – Lil’wat, Musqueam, Squamish and Tsleil-Waututh – were the hosts of the Winter Olympics, not Canada, so they played a huge part not only in the ceremony but also in the whole program. When you walked around the street there were Canadian Aboriginal people everywhere helping out. Many of the chiefs got on board and it was a huge example of the level of their self-determination – it was something to be really proud of.”

During the opening ceremony, Shellie performed her own composition, ‘Swept Away’, with the Vancouver Symphony Orchestra. She says it was fantastic to get the opportunity to perform the song, which has special meaning for her.

“When I came home 12 years ago and found all my Aboriginal family, I was swept away with all this love and acceptance from my family here in the Territory and also the support from my adopted family who encouraged me to find my culture. I’ve been overwhelmed by that love and that song represents that,” she says. Playing with the orchestra was a wonderful opportunity – to have all those strings and oboes and wonderful instruments playing my music was really lovely. I don’t think there was a dry eye in the house. I also sang a song called ‘Rain Storm’ in my sister’s mother’s language, Gundjehmi. My little sister Mandy has taken me under her wing with teaching me language and helping me understand my culture because I was very much removed from it. It was a wonderful journey to do those two songs with an orchestra.”

Apart from reconnecting with her own culture and meeting Indigenous Canadians, Shellie says her music has also given her the opportunity to connect with Indigenous women from Liberia.

“It’s been an amazing journey,” says Shellie. “I do a lot of work in the community and awhile back a lady rang and asked if I’d be interested in doing a couple of songs with women from the African country of Liberia for International Women’s Day. We did three songs and it was a big success so we performed a show at the Darwin Festival. The show featured myself, Lou Bennett, Leah Flanagan and six Liberian women.

“We wrote a show about our stories together and I was surprised again at the similarities with Indigenous people from Liberia. They also had the trauma of losing family, in their case because of war, and trying to trace family, as well as a desire to be back in their home or homeland. When you listen to some of these stories from these women you totally understand where they’re coming from. There are a lot of misinterpretations about African refugees due to lack of knowledge and education, which is the same thing that happens here with Aboriginal people in our own country.”

The show, Liberty Songs, is currently in development with plans to present it at major festivals in Australia and around the globe. In the meantime, Shellie is continuing to make music as well as continuing her work as an Ambassador with The Fred Hollows Foundation and The Jimmy Little Foundation.

“I’ve been travelling to remote communities for the past nine years because I wanted to incorporate literacy with songwriting. We record their stories and have lots of laughs. Their songs are sometimes half English and half language, and the kids teach me the language so I feel very honoured. When I came home 12 years ago and saw the lack of housing and the small voice the mob had in the bush I wanted to encourage them to have a voice and that voice comes through music. With The Jimmy Little Foundation I just visited five communities in Northeast Arnhem Land – those songs were promoting long life and preventing kidney disease, so that’s really important. Uncle Jimmy came as well and it coincided with their festival. Through that process we also made video clips that they uploaded to their mobiles and sent them via ‘Bluetooth’ to each other – it was very modern,” she laughs.

For now, Shellie is busy working on a new album and new show, as well as continuing to write songs and perform with the Black Arm Band who she says will always be remembered for one of their long-time performers and contributors, the late great Aunty Ruby Hunter, who sadly passed in February.

“We’ve been touring with Aunty now for four years with the Black Arm Band,” says Shellie.

“Both her and Uncle Archie loved what the Black Arm Band was all about, which is mentoring, family and working in the community. Aunty was a huge inspiration in my life. I feel like there’s a sense of courage that she’s left me and a sense of strength and hope for our families and communities – because that’s what she always had. She was my hero in so many ways as a strong Aboriginal woman and I want to follow in her footsteps. She had a wonderful profile in Australia and around the globe and she cared about everybody and made time for people. There is a great sadness that we all feel around Australia, even if you only spoke to her once she had a great impact on everyone she met and I hope to carry that flag in honour of her, in honour of Aunty.”