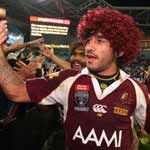 After leading 18 – 10 at halftime, Queensland held off a gallant comeback from New South Wales and scored late in the match to win the game 26 – 14 at ANZ stadium.

Inglis opened the scoring for QLD in the fifth minute after running over the top of some feeble NSW goal-line defence.

The Melbourne utility looked set to tear the game open for the Maroons but was forced from the field with concussion in the 22nd minute spent the remainder of the match watching on from the sideline.

A series of unforgivable NSW errors helped QLD skip out to a quick 18 point lead and despite second half tries to Jarrad Hayne and David Williams, the Blues were unable to stop Queensland’s charge to an historic series victory.

“It was a courageous win from a magnificent bunch of men,” QLD coach Mal Meninga said.

“These blokes will do anything to win, anything to ensure they don’t let their teammates down. That’s why they have four in a row. They have so much belief in each other.

“They make you so proud, you can’t speak highly enough of them.

“This team gets a lot of accolades for the footy they play, the terrific backline, a forward pack that works really hard. But that’s not why you win footy games. You win footy games on defence and attitude and that’s what this has been built on.

“They deserve this honour, their place in history – it’s bloody great to be a Queenslander tonight.”
The triumphant QLD outfit is now being talked about as one of the greatest Queensland Origin sides ever.

Jonathan Thurston received particular praise post match for his role in Queensland dominance over the past tree series.

“He’s turned into a great leader. One beyond his years,” said Queensland great and now assistant coach Allan Langer.

“Mate, I notice it at training. He’s always doing the hard work. He’s maturing really well – and there’s plenty to come from him.

“I’ve seen him for a while and had a bit to do with him. He enjoys what he does. He enjoys a win.

“But he is turning into the leader that will take this team forward.”

Inglis will undergo X-rays today to determine the extent of a jaw fracture suffered during a high tackle from Blues five-eight Trent Barrett.