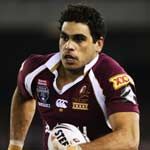 They were the raging hot favorites before kick off – and, in a head spinning twelve minutes of football wizardry that blew all blue hopes out of the water – Queensland proved exactly why they are being labeled one of the best teams in Origin history.

Queensland defeated New South Wales 28-18 in game one of the 2008 State of Origin series last night, the win punctuated by the performance of two of the state’s Indigenous stars.

New South Wales were controversially disallowed a try by video referee Bill Harrigan in the opening five minutes of the match.

Queensland then turned the Blues fortunes from bad to worse as they capitalised and ran in an unanswered three tries in a 10 minute period.

While New South Wales clawed their way back gallantly in the second half, a costly dropped ball from Blues fullback Kurt Giddley followed by a late try to Darius Boyd set up by Greg Inglis would ensure game one honors went to the Queenslanders.

Inglis scored two tries on the night. The first was a barging effort early in the first half and the second a 50 meter try that saw the star center beat a number of blue defenders as he streaked down the sideline.

Johnathan Thurston was named man of the match.