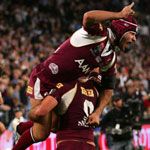 It took a flash of individual brilliance from Johnathan Thurston to hand Queensland their third successive State of Origin series victory at a packed ANZ Stadium in Sydney last night.

With scores locked at 10 all and only 13 minutes remaining, Thurston took the ball at speed just inside the Queensland half, squared himself to the Blues line, dummied, and burst through into open space, passing the ball back inside to set up Billy Slater for the match winning try.

At the post game presentation Thurston was also awarded the Wally Lewis Medal as the series top player.

In what was one of the most brutal Origin matches in recent years featuring several brawls, the Maroons were forced to overcome the loss of half back Scott Prince early in match after his arm was broken while attempting a tackle.

Having just made a return to representative football, the injury was a tragic blow for Prince who has already fought back from two broken legs in his career.

Prince will undergo surgery today and is likely to miss the remainder of the NRL season.