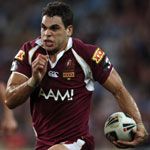 Darren Lockyer hailed Greg Inglis as the most naturally gifted footballer of his generation last night after Queensland thumped New South Wales 30-0 in game two of the State of Origin series.

In his most dominant performance of the season, Inglis came back to haunt the state in which he was born, setting up two long distance tries in the first half which sunk the Blues spirits.

“His build, his long arms, his athleticism … he’s a freak,” Lockyer said of Inglis who was also named Man of the Match.

“I don’t know of too many more gifted players than him.”

Inglis has been at the center of an Origin section controversy over the past two years, having beer born in the New South Wales North Coast town of Kempsey. His staring performance last night no doubt adding insult to injury for New South Wales fans and selectors who feel Inglis should be wearing blue rather than maroon.

The Maroons’ victory last night in front of 52,416 fans has set up a classic Origin series decider in Sydney on July 2. It was the first time NSW had been held scoreless since 1995 and the margin equaled the biggest ever for Queensland over the Blues.

An elated Inglis said he was now all-square with Mark Gasnier who stared in the Blues first game win.

“Gaz got one over me in game one,” Inglis said. “I hope I got one on him tonight.”