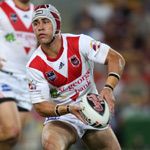 Jamie Soward enjoyed arguably the best game of his career last night, steering the Dragons to a memorable 25-12 upset win over the Brisbane Broncos at Suncorp Stadium

While Wayne Bennett’s return to Brisbane for the first time since leaving the club at the end of the 2008 season provided the engrossing sub-text to the match, it was Sowards stand-out performance that dominated post match interviews

“Even though he’s copped a bit of a hammering, he kept his head high and worked hard.

“His kicking game and general play are a big part of our side.”

After helping the Dragons take an 8-6 halftime lead, Soward extended the advantage in the 48th minute by scoring off his own bomb.

The win capped a scintillating form reversal for Soward after being the subject of heavy criticism for his defence following the Dragons’ round-one loss to the Melbourne Storm. League analyst Mark Geyer even called for the young half to be dropped from the team.

In a complete back flip, Geyer is now calling for Soward to be selected in the New South Wales squad for game one of the State of Origin series.

The playmaker is now also on target to smash a long-standing record.

Soward has kicked 66 times in the opening month of the NRL for a whopping 2500 metres, 1200 metres ahead of his closest rival.

In doing so, he has outbooted the best kickers in the game, including Cooper Cronk, Scott Prince, Darren Lockyer and Peter Wallace. Not even Andrew Johns in his pomp was able to match those figures.

If his kicking game continues to shine, Soward is on track for more than 15,000 metres for the season, some 5000 metres past the previous mark.