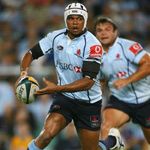 Waratahs playmaker Kurtley Beale has borne the brunt of his sides less than impressive form in recent weeks, with coach Chris Hickey refusing to guarantee that the five-eighth would start against the Blues in Auckland on Friday.

Beale has come under heavy scrutiny this Super 14 season which only intensified after the weekends 17-13 loss to the Crusaders at ANZ Stadium.

A loss to the Blues this weekend would see the Waratahs drop out of the top four and back-up five-eighth Daniel Halangahu is waiting in the wings should Beale be dropped.

Hickey said that a coach’s analysis of all player performances had already taken place and that different options would be put on the table as a selection meeting today.

Beale however appears to be the Waratah most under pressure to retain his spot in the side.

Beale was replaced 60 minutes into the match Crusaders in which the Waratahs squandered several tryscoring opportunities and turned over possession far too easily.

“I can’t put my finger on it. We are doing all the work, we are training OK and then just going out and putting that on the field,” said Captain Phil Waugh.