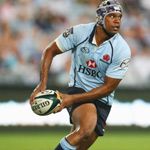 Kurtley Beale produced one of the highlights of the Super 14 season just one week after facing the prospect of being dropped from the Waratahs lineup.

Beale, who found himself under enormous to pressure to retain his spot in the team after a series of lackluster performances, bounced back in spectacular fashion against the Stormers at the SFS.

Having already lost his regular spot at five eight, Beale came on as a replacement fullback and made an instant impact on the game.

The highlight of the match was a piece of Individual brilliance from the Indigenous youngster in the second half.

After taking on the defensive line, Beale used raw speed to break the line before chipping ahead for Lachie Turner to score the match winning try.

The Waratahs ran out eventual 12-6 winners.

Turner later supported his embattled teammate saying the performance proved Beale would remain an integral part of the Waratahs campaign.