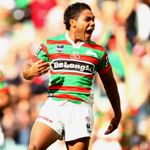 South Sydney half back Chris Sandow showed no signs of the dreaded “second year syndrome” at the SFS yesterday as he led the Rabbitohs to their biggest win ever over archrivals the Sydney Roosters.

The 2008 Rookie of the Year and George Green Medal winner picked up right where he left off last season, displayed scintillating form in South’s emphatic 52 – 12 victory.

After Colin Best opened the try scoring account for the Rabbitohs, Sandow laid on a superb try for new recruit Rhys Wesser after dancing around several Roosters defenders and a placing a deft grubber kick into the Roosters in-goal.

Sandow’s unpredictability and kicking game helped keep the Rabbioths on the front foot and a spectacular shoulder charge on Roosters winger Shawn Kenny Dowell, a player 18kg heavier, lifted the intensity of the Rabbitohs players even further.

More excitement was to come, and in the 71st minute, Sandow placed an exclamation mark on the clubs historic win when he chipped, regathered, and split two Roosters defenders to score beside the posts in a play that oozed class and confidence.

Winger and Redfern local Nathan Merritt also stared on the day, crossing for three tries including a 95m intercept effort and a spectacular leap and catch to score off a point perfect John Sutton kick in the corner.

The match capped and impressive first round for the NRL’s Indigenous stars.

On Friday night, despite narrowly losing to Brisbane, Jonathan Thurston and Matt Bowen resumed their uncanny combination to show the Cowboys will be a force in 2009. On the same night, Greg Inglis kicked the game winning field goal in Melbourne’s 17 – 16 golden point victory over St George.

Saturday night saw the emergence of a potential future super star in the form of teenager Jamal Idris who crossed for two impressive tries in the Bulldogs big win over reigning premiers Manly.