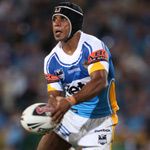 Deputizing for the injured Scott Prince in the half back role, Preston Campbell led the Titans to their second win of the season, downing the Bulldogs 20-12 at a rain soaked Skilled Park last night.

Young Indigenous star Esi Tonga also scored his first try of the season in the second half to keep the Bulldogs from regaining their early lead.

Prince was ruled out just hours before kick-off after injuring his hamstring at training during the week.

Campbell, who won the Dally M when he played in the number seven for Cronulla in 2001, was everywhere for the Titans, with nimble footwork and some brilliant passing, as well as a try of his own.

“It was a bit different, it’s been awhile since I played at half-back,” said Campbell speaking to ABC Grandstand after the match.

While admitting to a sloppy performance overall from the Gold Coast outfit, Campbell said they would gladly take the competition points.

“Our timing was a little bit off but we won the game, so I’m happy with it,” he said.

“I think near the end of the first half we really started getting into our rhythm.

“We came back out and we were a bit sloppy but two points is two points.”