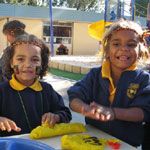 Families and school “learning together” at Challis

Students of the Kartajin Danjoo learning centre in Western Australia put their linguistic skills and vocal chords to the test recently, at the Challis Early Childhood Education Centre’s end of term assembly.

Children as young as four performed Noongar language songs for their school and parents, finishing with a version of I Am Australian, sung in both English and Noongar.

The assembly marked 18 months since the innovative Kartajin Danjoo early learning program was developed for Aboriginal kindergarten to Year 1 students in the Armadale catchment area.

Kartajin Danjoo means “learning together” in Noongar, and the program is designed to help Aboriginal children aged between four and six to become “school ready” and make a successful transition to primary school.

Principal Lee Musumeci thanked parents and members of the Aboriginal community in attendance for the progress that had been made through their close work with the school.

“I think the key has been listening to each other, so that we can come together in partnership to improve outcomes for all of our students,” she said.

“It’s about listening to the community, and they in turn understanding the school’s expectations.”

In 2007, Kartajin Danjoo was recognised at the Department of Education and Training’s Aboriginal Education Awards of Achievement for its unique approach to improving Aboriginal students’ attendance rates and educational outcomes, and this year won an achievement prize in the national Dare to Lead awards for excellence in Indigenous education.

While on the surface it appears similar to any kindergarten or pre-primary school, all students who attend the program are related. Brothers, sisters and cousins learn together, providing an extra support network for children as they adjust to a classroom environment.

The idea developed during a six-month consultation period between local elders, parents and the school and is one of a range of strategies that is boosting participation by Aboriginal children and their families in the school community.

Principal Musumeci says that such events are an opportunity for parents to visit the school and gain a better appreciation of the value of early childhood education.

“We realised through this project that parents needed to know why it’s important to send their kids to early childhood education,” she says. “Often there may be a lack of knowledge about what actually goes on at kindergarten and that children are learning important skills that will help them later on.

“We have a really strong literacy focus, and when parents see that, they understand the importance of sending their child to school.”

Parents! Now is the time to enrol your kids in local kindergarten or pre-primary school classes for next year. More information on enrolment is available from the Department of Education in your State or Territory.