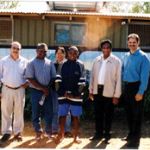 The Vibe/DETYA team then took to the air and headed for Broome for the second barbeque. The team arrived in Beagle Bay near Broome and headed for Sacred Heart School, where again the weather was great and the day went according to plan.

The winner on this occasion was Tessimah Bin Maarus. After the barbeque, the presentation was conducted at the front of the school. Once again Jimmy Little presented the winner with her plaque and prize pack. Jimmy Little was a big hit with the kids, many of whom were singing along with him.

This barbeque was also attended by the Governor-General of Australia, Sir William Deane, who was there as a patron of the Beagle Bay Church. Also in attendance was incoming Governor-General Anglican Archbishop Peter Hollingworth. DETYA representatives Geoff Bowley, Gaye Yu and George Ranger also attended.

Deadly Vibe would like to thank all who helped make these barbeques such special days for the Writing It Up winners, their classmates, teachers and families.