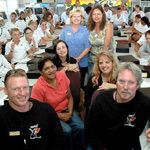 One school has totally transformed the education outcomes of its Indigenous students.

Swan View in Western Australia has the largest concentration of Indigenous people in the metropolitan area. The nearest town, Midland, currently has the fastest growing Indigenous population in the country. And until a few years ago, the Nyoongar students of Swan View Senior High School were dropping out at a rate of knots.

But today, Swan View Senior High is enjoying an almost 90 per cent retention rate of its Indigenous students. The school is full to overflowing, and every few days there is another enrolment.

The secret to the school’s success? Making education real.

“We realised that the students and the parents were disengaged from the school,” says Geoff. “They weren’t getting the support they needed; there was no feeling of kinship and no consideration of their culture. It was because of this that there were such low levels of attendance and achievement.”

Geoff, together with the schools Aboriginal and Islander education officers Susan Garlett and Tanya Cavanagh, spoke with Nyoongar students and parents about their needs, and researched different education models.

What they came up with was an alternative education model that was culturally sensitive and responsive to young Nyoongar people, combining education and training.

“We realised we had to engage the students as individuals,” says Geoff. “So we started out by building a relationship with the students – taking them to the beach, getting to know them and building a rapport. Once we achieved that we could move on to the next step.”

The Indigenous students in Year 11 and 12 now undertake three days per week of school in the special Aboriginal education unit known as Access, and the remaining two days of the week are spent in school-based traineeships.

“A lot of the students want to become teachers, and come back to work here,” says Geoff. “There are also students training in horticulture, community work, the automotive industry and the public sector. Local employers really think the world of these kids.”

The new curriculum in culturally inclusive, with students studying the Nyoongar language, and school projects are community-focused.

“So many schools expect Indigenous students to leave their culture behind at the school gate each morning; to turn white for the day,” says Geoff. “Instead, we respect our students’ culture and make it part of their schooling.”

Access has totally transformed the school and the expectations of the community. In 2002, as few as two or three students went on to Year 12. In 2004, 15 Nyoongar students graduated from Year 12, and eight have been accepted into university. The school came in the top 10 per cent in the state for their final year Information Technology results.

Last year, Geoff was presented with an Outstanding National Achievement by a Teacher award at the 2004 National Awards for Quality Schooling for his work at the school.

“It wasn’t just me who did this,” he says. “It was Susan and Tanya, as well as Wayne Morrow the Access coordinator, and our Access teachers Trish Buchanan, Robyn Garlett and Brenda Larsen. And the students themselves. They’ve proven that they can do it – we just need to give them the chance.”