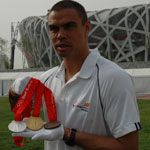 On the eve of the Beijing Games, Deadly Vibe caught up with champion hurdler Kyle Vander-Kuyp to talk about his new role as a mentor for our next generation of track stars.

STORY: The eyes of the word turn to Beijing this month, and to the 2008 Olympics games. But as they do, countless young athletes here at home will already be focussing on another destination – London, the site of the 2012 Games.

Also eyeing the 2012 Olympics, not as a competitor but as a mentor for our next generation of stars, is Australia’s greatest-ever hurdler, dual Olympian and 11 time national title holder Kyle Vander-Kuyp.

For the past 12 months, Kyle has been a part of Athletics Australia’s new Indigenous program, Jump Start to London 2012, which aims to provide mentorship, experience and new opportunities for young Indigenous people with an interest in athletics.

A major element of the Jump Start program has been to expose young athletes to intentional events and competitions. So last month, Kyle travelled to China with a group of Indigenous athletes to take part in a special test event for the Beijing Games.

“My role has really been quite an open one says,” Kyle says. “I’ve done everything from talking with the athletes about competing to training and supporting them on the track.

“With all my years of experience it seems to be a natural role – kind of like being an Elder or a leader.”

The Jump Start program already has over 80 Indigenous athletes registered, with 27 of them already competing at national and underage national championships.

“It’s always been a fact that the talent is out there, but really, athletics has lacked that nurturing and that care factor,” says Kyle.

“I think people have been surprised at just how far a bit of nurturing and a bit of care can go – a lot of the athletes involved are young and want it to happen really quickly, so I think its important to be able to stop them and say, ‘look, you’ve got to be in this for the long haul’.”

While some members of the program have excelled at the national level, participation is not dependent on time trials or state and national results. There is more of a focus on encouraging those with little experience in organised athletics to have a taste of it and see where it might lead.

“Some of the guys may not have really developed a training program before, or they might come from a remote community,” Kyle explains. “So it’s a massive learning curve – the taste of competition, of putting spikes on for the first time or hearing a gun go at a big stadium – that just might give them the motivation to go back to their community and decide to pursue athletics seriously.”

One member of the program who has hit the sporting headlines recently is 24-year-old sprinter Otis Gowa, who shocked everyone earlier this year by winning the men’s 100 metres at the National Titles in what was only his first Australian season.

“I’ve been mentoring Otis for the past 12 months,” Kyle says. “I fell out of my seat when he crossed the line and won the race!

“He beat the cream of the crop – you’re not meant to do that in your first season! But that just highlights the fact that if you give a young person the right support they can do anything.”

Having previously travelled to Singapore with a Jump Start group, Kyle says the recent trip to Beijing for a full test event at the Olympic stadium was an exciting, nerve-wracking and eye-opening experience for all who took part.

“Just to walk into the Olympic Stadium, I mean it gave me goose bumps,” Kyle said. “The Chinese have absolutely nailed it with all the facilities – it’s the best Olympics Stadium I have ever walked into.

“It was a full test event, so they went through all the check-in procedures. They were on the big screens before the races, they were announced in their lanes – it was all as though it was the Olympics, and there’s no better way to put a young athlete out on that stage to test themselves.”

As well as competing at Olympic stadium, the team also visited the Great Wall of China and, through Kyle’s association with BHP Billiton, were given an exclusive viewing of the Olympic Medals.

“It was a buzz just to see all the preparations,” Kyle says. “They were still finishing off all the last touches. The Chinese are a very proud people and they’ve put in so much effort.”

While he may not have laced up the racing studs himself, Kyle says he rode every inch of track and every hurdle with his athletes from the stands.

“To see these young Indigenous guys walk out and compete gave me a big thrill,” he says. “Some of them ran personal bests, but overall it was about getting them to learn something from the trip, whether that was the travelling, experiencing another culture, competing against elite international athletes, nervousness or preparation in a warm-up.

“They all took something away from it. It was a chance of a lifetime and something they will be telling their kids about – that they competed on the Olympic Stadium.

“The Olympics will come and it will be a massive showcase and I think they all got a little special part of it, and that might just be the thing that makes them want to wear the green and gold one day.”

Having taken part in two Olympics himself, this time around the Games will also provide Kyle with an opportunity to reflect back on his career and take stock of his achievements.

“I haven’t raced for a couple years now,” Kyle says. “It’s been a good time to reflect. When you’re racing and busy you don’t look back and think about what you’ve done, so it’s nice to now be able to look back and think: Wow! I’ve been to two Olympics; I’ve made an Olympics final.

“And now that I’ve taken the foot off the pedal, I can hand over that experience to the next generation.”

Kyle has been surprised at just how exciting the mentorship role has been, despite not being the one in the blocks. He is also well attuned to the day-to-day pressures faced by out athletes, who may only get one or two chances in their whole career to compete at the elite level of an Olympics.

“One of the young guys I’ve trained with just missed the relay for Beijing,” Kyle says. “So he hates the world; he’s angry he’s upset. I told him about how I missed out on going to Barcelona when I was 21 but it didn’t stop me – it just fired me up.”

When the Australian team was finally announced last month, there were some notable absences. Names like Matt Shirvington, Josh Ross and Patrick Johnson – all among the country’s best sprinters – missed out on representing Australia at the 2008 Games.

“Athletics Australia has taken a really hard position,” Kyle says. “They don’t want to take a big team and for the team they do take away they want them to be able to perform.

“They don’t want people to go just to make semi-finals or for the experience. They pretty much want guaranteed finalists and medals. So the Olympics are getting harder and harder to make and I think that’s a bit tough because you do need to send young people away for experience.”

Having being in a similar position over his own career, Kyle is certain that Joshua and Otis will only become better sprinters for the disappointment of missing the Beijing team.

As well as his mentorship role with Jump Start to London 2012, Kyle has also recently joined the Australian Sports Commission board.

“I think it’s exciting for the Indigenous community that they now have a black face on the board,” Kyle says. “It means I’ll have a say on things like sports funding for the whole country, right from school to the elite level.

“It’s a big challenge, but I think that after being in the sport for years and copping some of the politics that’s involved, I haven’t made trouble, I’ve just stuck to my guns.

“So when something like this happens it makes you think, ‘well, someone’s paying me respect now’.”