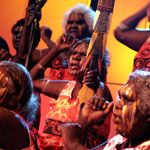 Presented in association with the Darwin Festival

The Studio will celebrate a fusion of two cultures in its largest musical project ever. Fifteen members of the Wangatunga Strong Women’s Group from the Northern Territory will unite with five Sydney musicians for one show only on Sunday, July 13.

Ngarukuruwala: We Sing Songs will combine the magic and wonder of traditional Tiwi Island music with contemporary jazz and funk. Premiering at the 2007 Darwin Festival, this collaboration balances the strength of song and culture with the musical complexity and talents of this mixed and celebrated ensemble.

The women’s choir from Nguiu on Bathurst Island, just off the coast of Darwin, create and sing songs that reflect their land and heritage. Performing largely at ceremonial and social gatherings, their sound has a gospel influence, a result of the Catholic Mission on the Island, as well as the rhythmic and melodic structures of indigenous Tiwi music.

History and dreaming are passed on orally with story telling told through song. Taught by their parents when they were young, the women now aged 40 to 60 still sing together nearly every day and are teaching the songs to their own grandchildren.

Whilst the choir use a guitar and tapping sticks in their music, the instrumental group includes double bass and drums, acoustic guitar, French horn, and saxophones. Between them, Genevieve Campbell, Dan Dinnen, Daniel Rorke, Brendan Clarke and Jamie Cameron, have played across Europe, Asia and the Americas.

Musical director Genevieve Campbell said she hopes the unifying language of music will help to connect people, both artists and audience, on a level of mutual respect and empathy that is sometimes difficult to achieve in modern Australian society.

Although the musicians and choir come from very different cultures, when they play together they speak the same language. The Tiwi women have shared some of their music’s secrets with the band who have in turn helped shape them into new and vibrant arrangements.

“The idea for this started almost two years ago when I heard a tape of the ladies singing and thought it might be fun to put my music together with theirs, just to see what might happen,” she said.

“The journey since then has been one of song, laughter, friendship and sand-fly bites. On the face of it there’s perhaps not much in common between the main street of Nguiu and the inner city of Sydney, but we’ve found, having talked, played, sung and danced together, that in many ways we are coming from the same place.”