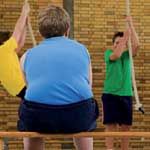 Carrying extra weight can do a lot more than make it hard to squeeze into those low-riding hipsters. It can wreak havoc with your health, too.

One of the biggest health issues in this country at the moment is obesity. More and more Aussies are becoming overweight or obese – obesity rates in Australia have more than doubled over the past 20 years, and if the increase continues at this rate, around 75 per cent of Australians will be overweight or obese by 2020!

How do we get fat?
Fat is deposited on our bodies when the energy we get from the food we eat is greater than the energy we use up. Even small imbalances over a long period can add up.

Why are we getting fatter?
There are a whole bunch of reasons why more of us are becoming overweight and obese. Factors known to increase the risk of obesity include:

How does this affect our mob?
Obesity is a particular concern for the Aboriginal and Torres Strait Islander community – around six out of 10 Indigenous people are overweight or obese. This is having a serious impact on our health and well-being.

DIABETES
Obese people are 10 times more likely to develop Type 2 diabetes – something that is already a big problem in our community. In fact, Aboriginal and Torres Strait Islander Australians have the fourth highest rate of Type 2 diabetes in the world.

Estimates vary, but it is thought that anywhere between 10 and 30 per cent of Aboriginal and Torres Strait Islanders have Type 2 diabetes. This rate is about two to four times higher than the rate for non-Indigenous Australians. The incidence of gestational diabetes (diabetes during pregnancy) is also two to three times higher among Aboriginal and Torres Strait Islander women than in the general Australian population.

OTHER CHRONIC DISEASE
Obesity increases the risk of many chronic and potentially lethal diseases. Most of these diseases are preventable with the right diet and lifestyle.

Generally speaking, the more body fat you’re carrying, the higher the risk to your health.

Some of the other chronic conditions and diseases associated with obesity include:

How can I avoid obesity?
The simplest way to maintain a healthy weight is to eat well and get plenty of exercise.

MORE EXERCISE
Even small changes in your day can make a difference in how much energy you burn.

To get some real health benefits, you’ll need to add some regular vigorous activity to your routine. Experts recommend getting about 30 minutes of vigorous activity (exercising enough to be breathless) three or four times a week.