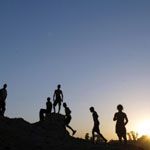 As a country we’re getting fatter, and it’s not doing our health any favours.

All over the world, more and more people are becoming overweight or obese. The World Health Organisation has called it a global epidemic; here in Australia, obesity rates have more than doubled over the past 20 years ” we are now one of the fattest nations on earth.

Who is obese?
While obesity occurs in all population groups in Australia ” kids, adults, Indigenous and non-Indigenous people ” Aboriginal and Torres Strait Islander people are more at risk of becoming overweight or obese.

The survey found that 28 per cent of Indigenous people were overweight and 29 per cent were obese. This means around six out of 10 Aboriginal and Torres Strait Islander people are either overweight or obese.

Why are we getting fatter?
Before white settlers arrived, Aboriginal people led pretty physically active lives. But, with the introduction of Western diets and conveniences, there is no longer any need to go out hunting and gathering. Being inactive is one of the main causes of weight gain.

Our traditional diet was also very healthy ” high in protein and complex carbohydrates and low in sugar. But these days, the diets of many Indigenous people are often high in refined carbohydrates and saturated fats.

How does obesity affect the body?
Being obese doesn’t just look awful, it’s also extremely bad for your health. Being overweight or obese increases your risk of a whole variety of serious health problems, including:

An obese person is 10 times more likely to develop type 2 diabetes than a person of normal, healthy weight.

Some of the complications of unmanaged diabetes include:

Your doctor can do a simple blood test to see if you have diabetes or are at risk of getting diabetes.

All in the Balance

Got a problem with your weight? You can achieve a healthy body weight and maintain it, and you don’t have to starve yourself or deprive yourself of the things you love. The key is moderation.

Combined with moderate physical activity, a healthy, balance eating plan can get you to a healthy weight and have you feeling healthier than ever before.

Fore more information on weight loss and healthy eating, speak to your doctor or ask at your local Aboriginal Medical Service.