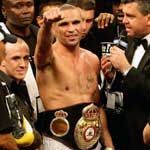 Anthony Mundine has defeated Sam Soliman for the third time in front of a near-capacity crowd in Melbourne.

While Soliman fought bravely after being knocked out in their previous bout, Mundine never looked out of his comfort zone on his way to earning a decisive point’s decision victory. Two of the judges awarded the bout to Mundine 116-112, while the third scored it 117-112.

Soliman started strongly with the support of a vocal home crowd but by the fourth round Mundine had asserted his dominance and was clearly on top.

Mundine also had the better of the middle rounds, a left hook in the ninth which brought the pro Soliman crowd to it’s feet being one of the few times the challenger managed to land a clean punch on the champion.

At the final bell, Soliman celebrated as if he had won the fight but it was clear Mundine had done enough to retain his WBA super middleweight title.

Mundine is now expected to relinquish the title and drop to the middleweight division where possible fights with Ronald “Winky” Wright and Kelly Pavlik await.