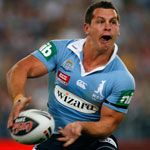 Rugby league immortal Bob Fulton crowned Indigenous five eighth Greg Bird as New South Wales own version of Wally Lewis after he steered the Blues’ to a memorable 18 – 10 game one victory in the 2008 State of Origin Series last night.

The impact of Wally Lewis for Queensland during the 80’s and early 90’s saw him dubbed simply as ‘The King’, and Fulton believes Bird can have much the same impact on the interstate series, saying that like Lewis, Bird is purpose-built for State of Origin football.

“What Greg Bird did tonight shows he can handle pressure on a consistent basis. It shows he is made for this type of football,” Fulton said.

“He is Wally Lewis-like in the way he plays the game.

“He takes pressure off his halfback with his defense and he’s got a better passing game than anyone gives him credit for.

“Like Wally, he is very intimidating. He has that air about him. I’m not saying he is a carbon copy – but he has that consistency at this level.”

“Greg Bird is made for Origin.”

With Bird’s trademark bruising defense leading the way, the highlight of his performance was a delightful cut-out ball to Mark Gasnier that laid on the Blues’ match-winning try 12 minutes from the buzzer.

The performance all but assures Bird will retain the number six jersey while the Queenslanders will be banking on the return of Darren Lockyer for game two in Brisbane in three weeks time.