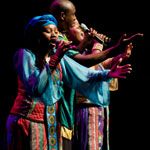 Heralded as the most exciting group to emerge in world music in recent years, the two-time Grammy Award-winning Soweto Gospel Choir is returning to Australia to tour its brand new show, African Spirit, nationally from 24 April to 25 June 2008.

A sell-out success in August last year when it premiered at the Edinburgh Festival 2007, African Spirit celebrates the strength of the human spirit and captures the beauty and passion that is Africa. Through vibrant rhythm, movement and its renowned vocal tapestry, the Choir perform a repertoire that reflects some of the history of their Rainbow Nation, songs of remembrance for the past, as well as songs of joy and praise for the present and future with a repertoire ranging from the traditional African gospel song ‘Sefapano’ to an extraordinary new interpretation of Bob Dylan’s ‘I’ll Remember You’.

Under the direction of choirmaster David Mulovhedzi, Soweto Gospel Choir draws on the best talent from the many churches and communities in and around Soweto, South Africa and performs in six different languages, including English, Xhosa, Zulu and Sotho.

Since its first international performances in Australia in 2003, the Soweto Gospel Choir has become a worldwide phenomenon performing sell-out concerts at the world’s greatest concert halls. In 2008, Soweto Gospel Choir will embark on major tours of the UK, Australia, Germany, Spain, Italy and the Netherlands as well as its fourth tour of the USA.

The choir has sung on numerous occasions for the father of democracy in South Africa, Nelson Mandela, was the guest stars at Oprah’s famous 2007 New Years party at Sun City, performed for Bill Clinton and sang Happy Birthday to its beloved Patron, Archbishop Desmond Tutu.

Apart from unforgettable performances, members of Soweto Gospel Choir seek to show gratitude for their own good fortune, by contributing to the lives of Aids Orphans back home in South Africa. In 2004 the Soweto Gospel Choir set up its own Charity Foundation in association with the established Aids Charity, Nkosi’s Haven. Called Nkosi’s Haven / Vukani (meaning to arise, do something!) the choir’s Vukani is named after late AIDS activist, 12 year old, Nkosi Johnson. At the conclusion of each performance, the Soweto Gospel Choir invite audiences to donate with funds going to the many AIDS Orphans Establishments which receive no government or private funding with 100% of the funds collected through concert donations going direct to the charity. To date, Soweto Gospel Choir have raised almost US$1 million from audience donations and last year fed, clothed and housed over 600 orphans.