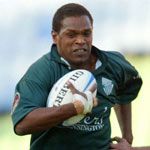 Willie Gordon was one of the brightest schoolboy stars on the Australian rugby scene in 1997. Completing his senior schooling at St Ignatius College, Riverview, where he was awarded a scholarship for athletics, Willie switched to rugby union and has since gone on to represent his state and country.

He was a member of the NSW A Team and represented his country in the Australian Sevens Team all around the world.

Willie is currently playing for the mighty Randwick Rugby Club, based in eastern Sydney, and has just signed a contract with the ACT Brumbies, runners-up in the 2000 World Super 12s competition. Willie will be a real striking force for the Brumbies in the 2001 World Season.