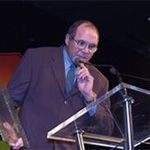 WARREN LAWTON
Warren is one of the fastest goalball throwers in the world, and has been clocked on the police radar at 80km per hour.

Warren’s first major success in the sport was playing in the national team at the 1992 Barcelona Olympic Games. He then went on to play in the World Championships in Colorado in 1994, and was ranked 4th place in the 1996 Atlanta Paralympics. His team also took out the Australian Nationals in 1994, 1996 and 1997.

Warren was born in Aughathella in 1996 and has been visually impaired since birth. He currently lives in Edens Landing and works as a mail officer at the Underwood Mail Centre.

Warren is the current holder of the Australian Record for Triple Jump (1986), won a bronze medal for high jump at the New York Paralympics (1984) and another at the World Championships Sweden (1984).

Remarkable achievements for Warren , and this year he will be representing Australia in the Paralympic Games in Goalball.

Goalball is a truly unique adrenalin rushing game for the visually impaired, played by two teams of 3 players. Each game is played for 14 minutes.

Participants are blind folded and play using a ball with bells inside. The players need to rely on their sense of hearing which makes this sport both mental and physical.

Spectators must remain silent throughout the 14 minute game, allowing players to focus on the sound and location of the ball. Cheering is allowed only after a goal or at the end of a game.