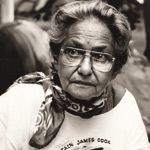 Oodgeroo Noonuccal, also known as Kath Walker, was one of the founding members of the Federal Council for the Advancement of Aborigines and Torres Strait Islanders (FCAATSI). FCAATSI was instrumental in the success of the 1967 referendum.

There’s a deadly story about Oodgeroo. During the campaign to get a Yes vote from the Australian public, she travelled to Canberra with members of FCAATSI to meet the then prime minister, Robert Menzies.

During their meeting, Robert Menzies offered Oodgeroo a glass of sherry, which she declined. She then advised the prime minister that he and his staff should be arrested, because at the time it was against the law to offer alcohol to an Aboriginal. Many believe that this really made Menzies think about some of his policies relating to Indigenous Australians.

Oodgeroo was also the first Indigenous Australian to have a book of poetry published, and she travelled around the world to create international awareness of the plight of Aboriginal Australia.

In 1972, Oodgeroo returned to her tribal land of Moongalba, on North Stradbroke Island. She set up the Noonuccal-Nughie Education and Cultural Centre, and invited others to come and share her land and learn about the Aboriginal way of life. By the time she died in 1993, more than 30,000 people had come to visit her here.