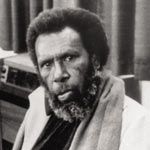 People can make a name for themselves in many ways, such as being a talented sports star, singer or famous actor. Sometimes, however, people become known for far different and less glamorous reasons, yet their names live on to attract reverence and admiration over the course of time. The many inspirational people who appear in the pages of this issue are testament to that, as they were common people who shared one common passion: to make the lives of other people better. Their names and work are remembered by many with fondness and appreciation.

And then there is one man whose name will live on in perpetuity; one who will always hold a special place in the history of both black and white Australia, thanks to his incredible achievement that rewrote history and earned his people their greatest and most vital victory. That man is Eddie Mabo.

Eddie Mabo was the man who led the way in overturning “terra nullius” (no-man’s land), a declaration used by the British to justify their claims to land that had been inhabited for many thousands of years by Indigenous people.

Eddie was born in 1936, on Mer Island in the Torres Strait where he was taught from a young age about his land.

As a young man, Eddie worked on pearling ships and later with the railway. At 31, he began work as a gardener at the Townsville university. Once there, he immersed himself in university life, sitting in on lectures and frequenting the library to read books written by white anthropologists.

During this time, Eddie learned in detail the initial justifications and legalities of how the land that he and his ancestors had lived on for thousand of years had been taken from them. The devastating realisation that his ancestral home no longer belonged to his people spurred Eddie into action.

During a land rights conference at James Cook University in 1981, Eddie outlined land ownership and inheritance on Murray Island. The Murray Islanders decided to challenge “terra nullius” in the High Court of Australia, and Eddie was chosen as the man to lead this historic battle for land rights.

The case for the Murray Islanders was before the High Court for 10 years before Justice Moynihan handed down his decision. After hearing the case, the judge concluded that Eddie was not the son of Benny Mabo, and therefore had no right to inherit Mabo land.

Rather than giving up, this decision further fuelled Eddie’s determination, and he challenged the court’s decision. Despite bad health he battled on. In 1992, at the age of 56, Eddie died of cancer.

Five months after Eddie’s death, the High Court handed down its decision. Although the court had previously ruled that Eddie was not the rightful heir of the land he claimed as his own, this did not alter the fact that native title existed on Murray Island. Thus, the High Court ruled that it was up to the Murray Islanders to determine who owned the land.

This was an incredible victory for all Indigenous people who had been deprived of their land, as well as a great victory for Eddie Mabo and his people.

Thanks to Eddie, who dedicated his life to this struggle, “terra nullius” was revoked forever.

Although the battle for land rights still rages, we will always remember Eddie Mabo for his incredible victory. Three years after his death, the body of this caring, dedicated and passionate man was returned to his people and buried as a king.