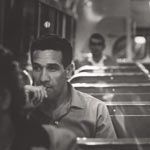 Deadly Vibe Issue 90 August 2004 Hitching a ride to freedom During the 1950s and ’60s in the United States, something big was going on – black people were standing up for their rights. After years of segregation, protest and resistance by African-Americans, justice was finally done. The American Civil Rights Act was passed in 1964 specifically prohibiting discrimination in voting, education and the use of public facilities. All the way over on the other side of the world, in Australia, people were sitting up and taking notice – seeing what could be achieved, even in the face of such deep-rooted prejudice. Not the least of those to take note was a young university student named Charles Perkins. Inspired by what he had seen, Perkins decided to create his own version of the US Freedom Rides, where white and black Americans had ridden together on buses to protest desegregation on public transport. Together with 29 other university students, Perkins led a bus tour across northern and western New South Wales. Their aim was to protest the racial discrimination that was rife in so many towns in this region. Many Indigenous people were being denied service in shops, were separated from white people in schools and movie theatres, and banned from many public facilities. Verbal and physical abuse was also common. The protesters knew that the only way to stop this from happening was to raise the nation’s awareness of the situation that Aboriginal people were forced to live in. This group of civil rights activists became known as the Freedom Riders. The bus travelled through towns such as Coonamble, Wellington and Gulargambone. In Walgett, the protesters picketed the Retired Servicemen’s League (RSL) club. Aboriginal men who had served in the war were rarely, if ever, permitted inside to use the RSL facilities. It was during this protest that they began to receive the nationwide attention that they needed. By the time the bus reached Moree, the Freedom Ride had received national and international media attention. It was here that a dramatic and violent confrontation broke out over the issue of segregation at the local swimming pool. The Freedom Riders were punched, pushed and spat upon as locals shouted obscenities and racial slurs. The dramatic scenes were seen nationally. The public awareness raised by the Freedom Rides stirred up debate, which in turn led to pressure for reform. The actions of Charles Perkins and his Freedom Riders were an important influence on such nationwide decisions as the 1967 Referendum, which awarded Aboriginal Australians the same rights as the rest of the population – meaning that they were finally recognised as full citizens of their own country. ” I am a descendant of a once proud tribe from Central Australia – the Arrente people. Today we number very few and own nothing … We cringe like dogs at the prospect of the ‘White backlash’. We pray eternally that the White authority structure will not turn on us and impede what little progress we have made. We ask for land rights with tongue in cheek knowing full well that the land belonged to us in the first instance. We stagger and stumble into each other in confusion when our identity … is contested and thus allow ourselves to be moulded by others. Our land, our pride and our future has been taken away from us and our people buried in unmarked graves. We wander through Australian society as beggars. We live off the crumbs that fall off the White Australian tables and are told to be grateful. ” This is what Australia Day means to Aboriginal Australians. We celebrate with you, but there is much sadness in our joy. It is like dancing on our mother’s grave. ” We know we cannot live in the past but the past lives in us.” Charles Perkins (First Indigenous Australian to graduate from university.) (story 1/08/2004 end)