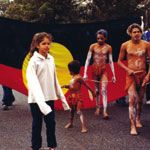 Reconciliation is all about forging a new future by honouring the past and healing old wounds.

In many places across the country, Indigenous and non-Indigenous people have come together in various ways to acknowledge history and move forward in unity. One of the most poignant of all places where this takes place each year is at Myall Creek in northern New South Wales.

Myall Creek is the site of the Myall Creek Massacre ” a tragic but historically important event in Australian history. It is also an event that to this day holds great importance for the hopes of building a better future between black and white Australia.

In May of 1838, a group of around 40 Aboriginal people (the Kamilaroi) set up camp on landowner Henry Danger’s Myall Creek Station. Around the same time a group of white stockman and squatters who were seeking revenge for the loss of some cattle made their way to the Aboriginal camp.

Although the Aboriginal campers had no involvement with the attacks on the livestock, a cold-blooded massacre ensued. Twenty-eight Aboriginal men, women and children were murdered.

The brutality of the stockmen was horrendous. Children were decapitated and bodies were hacked to pieces. Finally all the bodies were heaped onto a fire and burnt.

An investigation into the murders was launched and 11 stockmen were charged. This was a landmark event ” the fist time a white person had been charged with the murder of an Aboriginal person after decades of killing. The 11 men were originally found not guilty, but in a retrial seven of the 11 men were found guilty and sentenced to be hanged.

Myall Creek remains the only massacre for which Europeans were charged, found guilty and punished.

In 2001 the Myall Creek Massacre Memorial was erected on a hill overlooking the site. The path winding up to the monument has seven smaller rocks, each telling a part of the story.

At the special opening of the memorial, descendants of the victims, survivors and perpetrators of the massacre came together in an act of reconciliation. On the same date each year, people return to the memorial for a commemoration ceremony.

In March 2005, the Myall Creek Massacre Memorial was awarded the Australians for Native Title and Reconciliation (ANTaR) Innovative Reconciliation Prize.

While it will always remain a tragic chapter in Australian history, Myall Creek today has also become a place of hope for future generations, where lessons from the past are learnt and shared. Because of ceremonies like Myall Creek, more and more non-Indigenous Australians are becoming aware of the true history of their country.