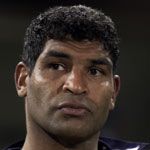 Jim has been a regular member of the Australian Sevens Team since 1992, playing in tournaments all around the world. Because of his enormous size, mighty strength and ability to dash around the field at great speed, Jim is able to play in several positions.

Jim’ s outstanding performance for the ACT Brumbies in the 2000 World Super 12s earned him a representative position with the Australian Wallabies. While some people have questioned whether he can handle the level of competition, Jim has proved the critics wrong, playing strongly for his country in both defence and attack positions.