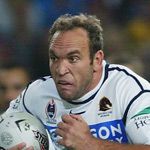 One of the great sights in rugby league is watching a big player charge for the line, ball held tightly to his chest. Defenders converge on him from all sides, pulling at his arms, shoulders and torso, trying desperately to pin his legs together and bring the big man down. But he has a lot of momentum, and – try as they might – the defenders can’t stop him. He sees the try-line draw ever nearer, and with superhuman strength he surges over, with three or four defenders hanging off him. He falls when he’s ready, and the opponents come crashing down like pins in a bowling alley. Try time!

If you ask anyone who loves rugby league to name the player who first comes to mind in this scenario, the answer will be Gordy – Gorden Tallis, star forward (and sometimes captain) for the Brisbane Broncos, Queensland and the Australian Kangaroos.
Gordy has scored countless crucial tries in the awesome manner described above, and often when all seemed lost in the game and his teammates’ heads were starting to hang.
More through strength of willpower than strength of body – although, at 189cm tall and 105kg, there’s plenty of that, too – he has been the difference between winning and losing. He’s a vital element in the ongoing success of every team he has played for.

On the field, Gordy is an inspiration to anyone who pulls on a pair of boots and has a run. He plays it hard and fair, and refuses to accept defeat until the final whistle has blown. More often, though, he’s a winner.

Off the field, he’s just the same. Born in Townsville in 1973, he hit the rugby league big-time when he joined St George, quickly making a name for himself as a dynamic interchange player. He spent four seasons with them before Super League arrived and shook up the game.

Gordy hated the disloyalty that was part of this new regime, and as a matter of principle he sat out an entire season – a brave decision for a young man of just 22. In 1997 he joined the Broncos – and the rest is history.
His other big challenge came in 2001 when he suffered a career-threatening neck injury. The doctors told him to give the game away, but Gordy refused to say die, and his struggle to overcome the injury and get back on the field was truly heroic.
As well as having strong principles, Gordy is also a man of great passion. He’s been in the odd on-field brawl when his emotions have got the better of him, but then, which player hasn’t? More telling is an incident that occurred when former Kangaroo Rodney Howe failed a steroid drug test: Gordy said publicly that Howe was a cheat and he would never respect him. Then, during a game, Tallis targeted Howe, calling to his Broncos teammates, “Watch out, you blokes. Here comes the chemist. Watch out for all the needles.” Gordy was not prepared to let a cheat get off lightly. Gordy is, without doubt, one of the most admired players of his generation – not only by the general public, but also by his fellow players. So it was no great surprise when, after that game, Howe was found alone and crying in the dressing room.
Gordy has said that he wants to play so well that boys will say they want to be like Gorden Tallis. We’d say, ‘Mission accomplished!’
He has now retired from representative footy at both state and international level, which means the Broncos’ opponents can expect an even greater onslaught this season. He has won everything the game has to offer, and something that no amount of training can provide – the respect of his peers.
Gordy is a true champion.