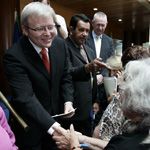 To say it was a day of celebration would be incorrect. But there was definitely something in the air on Wednesday, February 13 ” an almost tangible sense of relief, tinged with the kind of sorrow that few can comprehend. A sorrow that was, finally, officially acknowledged for the first time.

First generation survivors were among those who were in attendance to witness this event, along with family representatives of Stolen Generation members, past Prime Ministers, Aboriginal activists from the 1967 Referendum and Indigenous sporting stars, as well as business leaders and representatives of national organisations who have been campaigning for many years for this apology to be made.