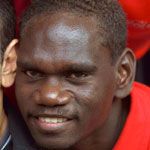 This Tiwi Islander is following in the footsteps of the great Michael Long.

Edward Darcy is on top of the world. The reason? On Friday, 7 June he was named recipient of the first Michael Long Scholarship Program.

Developed in partnership with ATSIC and Essendon Football Club, the scholarship is awarded to a young Indigenous footballer from the Northern Territory or Tiwi Islands who shows potential as an AFL player.

Edward, 19, comes from Milikapiti on Melville Island, and has relocated to Melbourne to play with Essendon’s VFL side and study part-time.

“I can’t explain how it feels to be picked for this scholarship,” says Edward. “It’s the highlight of my life so far.”

Although city life is a big change from life in the Top End, “˜Fast Eddie’ ” as his friends call him ” is up to the challenge.

“I’m really enjoying being down here and taking part in the scholarship. Sometimes I get homesick but I have to get over that if I want to play football at the highest level.”

At the moment, the young Tiwi Islander is working on developing his game in VFL. And the right people are sitting up and taking notice. Playing his debut game with Essendon against Coburg in April, The Age noted he had “exquisite skills”. Meanwhile veteran commentator Phil Cleary wrote that “Darcy’s beautiful disposal with left and right foot and his speed and ball handling suggests he’s one to watch”.

Picked to go into next year’s draft, Edward says he would like to stay at Essendon. However he doesn’t really care where he plays, “as long as I can play in the top grade”.

“It’s a good course that teaches you to become a leader and not a follower,” he says. “It also teaches you to open up in group discussions, which is good because when you’re a new player to a club you don’t talk much.”

When he’s not training twice a day, four days a week, or studying, Edward works part-time at the club, selling merchandise in the Bomber Shop.

“I work there four times a week in between training. Each training session is about two hours long, so by the end of a session I’m pretty tired!”

Essendon’s development officer David Flood believes the club has made the right decision in picking Edward for the scholarship.

“Edward is a great young player with a lot of skill,” says David. “He can kick off both feet, which is pretty rare for a young player, he has great vision and he can create something out of nothing. But the biggest thing is the way he has adapted to the lifestyle here after coming down from the Northern Territory.”

And what with the way he’s developing as a footballer, “˜Fast Eddie’ probably won’t be returning to the Top End for quite some time.


What is your full name:

How old are you:

Where are you from:

Were you born there:

No. I was born in Darwin.

Are you the oldest, somewhere in the middle, the baby, or an only child? Middle.
What do your friends call you:

What was the first sporting event you ever saw:

When did you start playing sport:
Eight or nine years old.

If you could form a team with your choice of players, who would they be and what would you call it:

I would just have a team full of my friends because I’m a bit lonely down here in Essendon. What’s the funniest thing you’ve ever done on a sports field? Missing a goal from right in front about 15 metres out.

What sport do you follow in your spare time:

Rugby league ” I go for the Canberra Raiders.

Name a song that most describes who you are:

What CD do you have in your CD player at the moment:

Who is your favourite Aboriginal or Torres Strait Islander musician:

Most fulfilling experience in your life so far:

Getting the Michael Long Scholarship.

What is your best asset:

What would you most like to change about yourself:

My size.
Who’s real deadly in your eyes:

If you could have anything printed on a T-shirt that you had to wear for the rest of your life, what would it say:
“˜Be The Best You Can’.

What’s your favourite part of Australia:

You’re invited to a fancy dress party. Who or what do you go as:

I would go as a surfer in shorts and singlet.

Make one prediction about 2002:

Essendon will win the Premiership.

Where do you see yourself in 10 years’ time:

Back home on the Island with my own house.