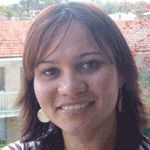 Kiarna Adams grew up in Darwin dreaming of becoming a doctor one day.
But as she went through high school, she talked herself out of it, thinking that a career in medicine would be too hard.

Instead, she headed to Melbourne to start a degree in health science. Yet that dream of being a doctor just wouldn’t let go.

Finally, Kiarna decided to go for the career that she really wanted. She discovered that the University of Western Australia had a pre-medicine program, so she packed her bags, completed the program in early 2000 and a week later was sitting in lecture theatres with her fellow doctors of tomorrow.

But her achievements didn’t end there. In 2001, Kiarna was a member of the National Youth Roundtable, at which Dr David Kemp, the then Minister for Education, Training and Youth Affairs, expressed his support for an Indigenous health career information book.

Kiarna got on the case and, a year later, was proudly standing beside the current Minister for Education, Science and Training, Dr Brendan Nelson, as he launched her booklet No Shame Job.

“I wrote the booklet to help give young people confidence,” says Kiarna. “If I’m studying medicine, then lots of other people can do it.”

More than 11,000 copies of No Shame Job have been distributed throughout Australia already, through events such as Croc festivals and places such as Centrelink and Indigenous health organisations.

Another 17,000 booklets are being distributed through ASSPA committees. If schools and community groups would like to receive No Shame Job, download an order form from www.dest.gov.au/schools/careers/ciproducts.htm