Around two years and 30 kilograms ago, Andrew Saunders had little confidence or motivation – if any at all. His health was deteriorating, and he was on the track of becoming an unhealthy, and overtly shy adolescent, but something clicked. He was tired of feeling down physically, mentally, and emotionally, so he grabbed life by the horns and made an amazing and inspirational transformation. 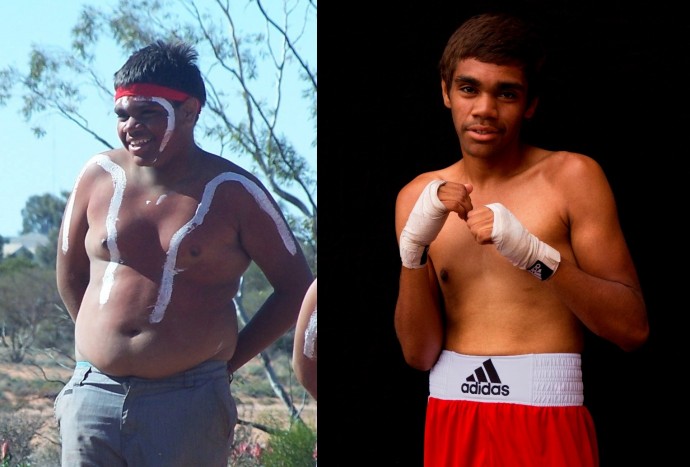 30 kilos ago, Andrew was lacking in confidence and motivation, but now his confidence is at an all-time high and he’s fitter than he’s ever been. Picture: ABC Open Producer at ABC News and maker of ‘Becoming My Own Person’, Anthony L’Huillier.

Andrew underwent a radical change. Fast food and videogames aside, he traded the lounge for the gym, and fast food for whole and healthy food. Fuelled by his passion for boxing, he began training at the Port Augusta Boxing club and within 14 months, he shed one third of his body weight and was ready for his first boxing bout.

“When I was 30 kilos heavier I felt unconfident and, actually, pretty…I dunno, I didn’t feel good about myself,” says Andrew. “I’m way more confident with everything, talking – just everything. I feel way happier and I’m just enjoying myself at the moment.”

In fact, the young man’s journey was so inspirational that when ABC Open Producer at ABC News, Anthony L’Huillier, saw his determination he decided to make a documentary about it. Shot over 21 months, ‘Becoming My Own Person’ follows Andrew in his times of triumph and failure on his journey to becoming a boxer.

“It was an ABC fella named Anthony and he does training down at our gym and he looked at me and saw my dedication and my hard work. He was there from the start when I was 30 kilos heavier, so he just started to do a documentary on me,” he says.

“I’m actually pretty happy because I always wanted to, you know, do something like that, and inspire other kids and everyone who’s got problems and hard times. Not just trying to lose weight but just has a hard time with anything. There’s always some good going to come.”

Andrew had a solid foundation of support behind him that kept his morale up in times of weakness. His parents, brother, boxing coaches, and friends – who are all thoroughly proud of him – were with him the whole way. But in the end, it is Andrew’s accomplishment.

“[I did it] through hard work and dedication and just kept thinking ‘keep going’, and just thinking that I’m going to get there. It was hard work because all I was doing everyday was training and not eating a lot. It was hard, but I got there and it was all worth it,” he says.

Andrew’s fitness journey started because he had aspirations of becoming a professional boxer. He had shared an interest in boxing with his local boxing club to which they told him to lose a bit of weight over the Christmas break and then come back. To the coaches’ amazement, Andrew had lost nine kilograms, showing them he was, indeed, serious.

From there, Andrew underwent an exhausting workout schedule, training six times a week, sparring, sprinting, jogging, and doing weights. Within another few months, he was in the best shape of his life, weighing 63kg and ready to box.

In his first ever boxing match in August of 2013 in the Boxing SA Tournament, Andrew won. One month later, he competed again and was victorious. He then went on to compete in the Amateur South Australian Titles in the junior novice division in October of 2013 and won that bout by default. Because he couldn’t compete in the titles, he was entered into a show fight the next day but, despite fighting valiantly, Andrew tasted defeat for the first time in his career.

By now Andrew, who cites Filipino pocket rocket, Manny Pacquiao, as his favourite boxer, had become a household name among the local boxing community but after his loss, was beginning to doubt his ability. But he jumped back on the horse, subsequently winning his next match in February of 2014 and the biggest match of his amateur career the following month.

Despite all his success and how far he has come, he’s not nearly close to throwing in the towel.

“It’s good, really good. But I still have a long way to go and I’m taking small steps and just enjoying myself and enjoying life,” he says. “I want to try to go as far as I can with boxing and with anything I could do.”

Andrew will continue to train hard well into the future as well as do his best at school. So keep an eye out, because at the rate he’s going anything is possible, but he knows that he’s definitely not going to let himself become unhealthy and unhappy again. As he says when asked: ‘What would you say to yourself 30 kilograms ago?’

“I never thought of that, but probably ‘Why did I get that big?’ I don’t want to go back there again,” he says.