NRL Round 18 Preview with Jake Keane

Club coaches, and plenty of fans, will happily welcome back unaffected (to an extent) Origin footy players this weekend, with the series having culminated in Brisbane on Wednesday night. As great a spectacle and drawcard Origin is for the game, there is no denying the brutal toll the series takes at the club level. Even though the series has wrapped up, plenty of players will return for their clubs but play fatigued this weekend. The end of the Origin series also marks the beginning of the the final run home to the finals and, at present, the ladder remains a complete logjam of contenders. 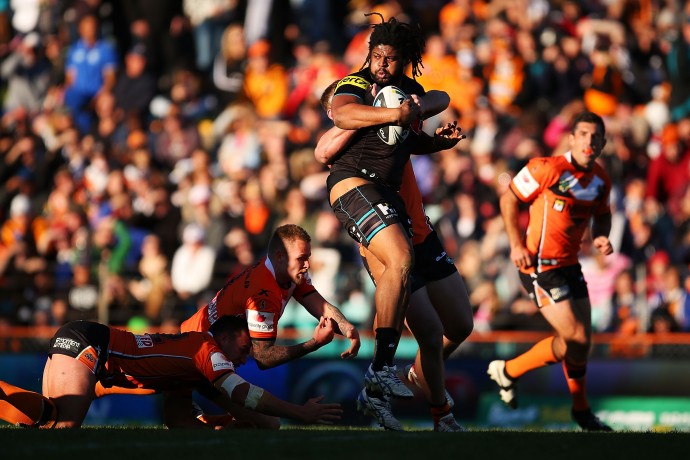 Jamal Idris has been fired up and in great form since returning to the NRL following a short break from the game. Jamal and the Panthers take on the Broncos Monday night in Sydney. Photo: Getty Images.

Round 18 gets under way on Friday night when the Sea Eagles host the Tigers at Brookvale. After a great win against the Roosters, the Sea Eagles fell to the Bulldogs last weekend in an upset. The result continues a year of marked inconsistency for most teams. Just when the Rabbitohs appear to be coming good, they slump terribly, as have the Roosters. While the Sea Eagles have been far more constant, their ability to back up after a good win has been a recurring issue for them. With a near full-strength team and Cherry-Evens leading the way, the Sea Eagles enter the match against the mid-table and injury depleted Tigers as strong favourites.

Of the two Saturday night games, the Storm V Bulldogs clash looms as particularly interesting considering both are current Top 8 teams, with the Dogs sitting equal first on total competition points (third in for and against). Meanwhile, the eighth placed Storm will need to start their run for a top 4 finish now, and considering the Bulldogs will be among the tougher challenges in their run home, a win here could be vital to exactly where they finish on the ladder. The Storm will welcome back most of their Origin contingent, with only Cooper Cronk expected to miss the match. Home ground advantage and recent form points to a blue and white victory, but it could be a close one.

On Sunday a battle of two bottom of the ladder teams takes place when the Sharks host the Knights, a clash with some intriguing context considering Wayne Bennett has just announced that he will leave the Knights at the end of the season – and the Sharks are backing up from the mother of all upsets by way of their come from behind win over the Roosters last weekend, a match most people, including myself, gave them almost no chance of winning. It would take a brave man or woman to confidently pick a winner in this match. Both teams are on a two game winning streak. The Sharks showed last week what emotion can provide to a team – but how much do they have left in the tank after that most emotionally draining of weeks and comebacks? The Knights, meanwhile, will have fresh motivation with their coach announcing his departure.

In the final match of the round, the competition leading Panthers host the sixth placed Broncos in another clash that could have significant top 4, and certainly top 8 ramifications. As always, Brisbane will field a large contingent of players backing up from Origin, which could play a part in the result. The Panthers also have a terrific home record this season, winning seven of their last eight games at Sportingbet Stadium.